The TNA has put forward a number of demands, including the need for India’s intervention in resolving the ethnic issue and the provincial council system.

They have also discussed issues pertaining to development, Minister Jaishankar said. The TNA delegation was led by TNA leader Sampanthan. 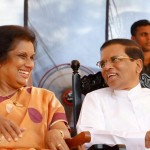 Next article - No conflicts among us, we work together: Maithri responds to CBK’s remarks »