Tense situation as war monument in Jaffna University is destroyed

A tense situation arose in Jaffna today as a war monument in the Jaffna University was destroyed by the authorities.

The Jaffna media reported that the gates of the Jaffna University had been closed and Police were deployed near the gates as the war monument was completely destroyed.

Dozens of Tamils are staging at demonstration outside the University of Jaffna in a tense stand off as armed Sri Lankan troops have block off the entrance, after authorities bulldozed a memorial monument.

The protestors are calling for the Vice Chancellor of the university to come outside and meet them, as heavy machinery was seen toppling a monument dedicated to the tens of thousands of Tamils killed by the Sri Lankan state during the Mullivaikkal massacres. 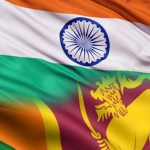 Next article - Indian projects in Sri Lanka to be expedited »