Displaced and disallusioned Tamils live in fear without security

“Displaced Tamil people from the villages of Alankerni, Upparu and Eechantivu live in fear and without any security to their lives and properties,” parliamentarians Mr.Adaikalanathan and Mr.Sivajilingam of Tamil Eelam Liberation Organization (TELO), a constituent of the TNA told media persons Saturday in Trincomalee after visiting displaced Tamil families staying in Eechantivu Tamil School as refugees for more than three weeks following violence in Kinniya.
Parliamentarians Adaikalanathan and Sivajilingam listening to the grievances of Tamil refugees at Eechantivu

“We would bring to the authorities concerned the difficulties Kinniya Tamil families are now undergoing due to displacement from their villages,” said Mr.Sivajilingam

Hundreds of Tamil families have been living without any basic facilities and have been isolated from other parts of the district as the authorities have not taken steps to resume State run bus services to the Tamil villages, said Mr.Sivajilingam at the press briefing held at the TELO office in Trincomalee.

Mr.Sivajilingam said the Sri Lanka Government had ordered cooked meals for the first three days to the displaced Tamil refugees. However later the government authorities instead of cooked meals handed over food stamps to buy dry rations. But Kinniya Tamil refugees are unable to buy their dry rations from the Alankerni branch of the Kinniya co-operative society as the Muslim manager of the branch has closed the premises.

Tamil refugees at Kalaimagal Vidiyalayam
Kinniya Tamil families live without medical facilities as the government dispensary has been closed down. Some areas in the Tamil villages have been without electricity supply, Mr.Sivajilingam said.

The Tamil Rehabilitation Organization (TRO) in Trincomalee district supplied food and clothes to these refugees and other welfare organizations also have been providing assistance to the families, sources said.

Both TNA parliamentarians were given escort by the Sri Lanka Army to visit Tamil villages in the Kinniya division via Thampalakamam village, sources said.
TamilNet, December 06, 2003 18:16 GMT 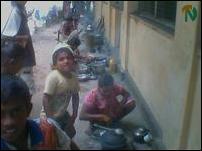 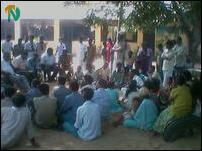 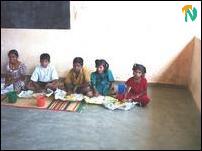 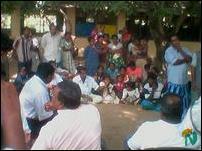 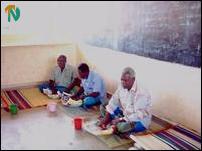 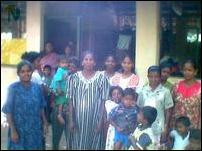 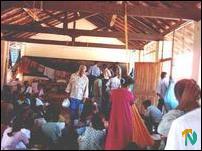 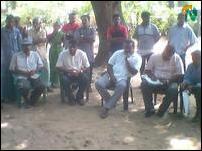