The Jaffna University Vice Chancellor has given assurances that the destroyed Mullivaikkal memorial monument will be rebuilt “with proper approval” in its previous place and placed a foundation stone today morning, to symbolise that he has “accepted the demands” of the students.

The Vice Chancellor said the decision was taken to rebuild the monument considering the students’ protests and the Harthal launched in North and East.

Last night, the health of at least one of the students on the hunger strike deteriorated to the point that he had to be seen by a doctor near the protest site.

Sri Lankan police and Special Task Force (STF) officers prevented students from entering as they tried to enter the university at around 7am. However, Srisatkunarajah took the students inside the campus and went to the campus’ Parameswaran temple to pray together.

When he went with the students to the place where the monument was demolished, the officer-in-charge of the Kopay police station confronted him and stopped them.

Srisatkunarajah explained to him, “We are not currently involved in any construction work. Let us place the stones in the place where the monument was demolished. My students have been on a hunger strike for three days. I’m in a position to end this. Do not stop us”.

He claimed that this was the “Sri Lankan government’s orders” and that there has been huge backlash, particularly from Tamil Nadu in India. The VC then stated that the monument will be built with the “proper approval”, to which the officer-in-charge of Kopay station accepted and allowed for the foundation stone ceremony to occur.

The VC, who accompanied the students to the memorial, sang a Thevaram and laid a flower next to the stone. Students then also laid flowers at the memorial place.

When students tried to leave the university campus after finishing the ceremony, the Sri Lankan police stationed inside the university insisted they needed to record the details of the students who visited the memorial.

As students refused to give their details, the police claimed that they needed to take the details because of COVID-19 protocols. The VC, accompanied by the Kopay officer-in charge, then intervened and allowed the students to leave without them having to submit any personal information. 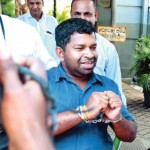