A total of 31 Members of Parliament have been asked to self-quarantine in Sri Lanka thus far, after three parliamentarians were identified as Covid-19 positive recently.

This includes 10 MPs who were identified as close associates of Minister Vasudeva Nanayakkara, who had tested positive for the virus earlier today.

Sergeant-at-Arms Narendra Fernando stated that the parliamentarians identified as the minister’s first contacts as well as relevant authorities have been notified.

The remaining 20 parliamentarians are close contacts of State Minister Dayasiri Jayasekara and MP Rauff Hakeem, who have also previously tested positive for Covid-19.

Minister Nanayakkara had reportedly attended all four days of last week’s parliamentary sittings. Accordingly, he had attended Parliament on January 05, 06, 07 and 08 while he had delivered oral response in the House on the last day.

The minister had also reportedly attended an event at the Waters Edge on January 05.

Health officials have taken steps to carry out PCR testing from 10am to 3pm on January 13 and 15 while the Speaker of Parliament has notified the MPs to participate in the testing.

Meanwhile the Secretary General of Parliament Dhammika Dasanayake states that the Proceedings of Parliament will continue in accordance with health guidelines given by the health authorities.

He said that discussions had been held with the health authorities regarding the situation and that all the places where the COVID-19 infected MPs were staying had been disinfected by now.

Mr. Dasanayake states that random PCR tests are being conducted for the parliamentary staff members and also said that arrangements have been made with the health officials to conduct PCR tests for the staff members at the Parliament complex in the next few days. He said that the Staff perform their duties in accordance with health regulations.

Meanwhile, the Committee on Parliamentary Business is scheduled to meet on the 13th January at 2.00 pm under the chairmanship of Speaker Mahinda Yapa Abeywardena to decide the proceedings of next sittings of Parliament.

Mr. Dasanayake further states that the staff of the Secretary General is ready to continue with the proceedings of Parliament in accordance with the decisions taken by the Speaker and the party leaders. 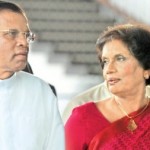 - Previous article « CBK hits out at Sirisena: Says his remarks made in ‘Hindu’ interview was false