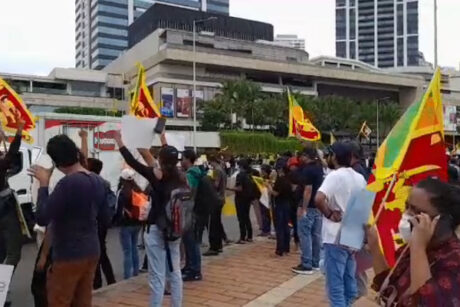 Protestors occupying the Galle Face Green were seen vacating the premises today ahead of the 5.00 p.m. deadline set by the Police. The Colombo Fort Police had informed those occupying tents and temporary shelters at the Galle Face protest site to vacate the premises by 5.00 p.m. on August 5 and threatened legal action against those who do not comply.

The library and the school of Gotagogama has been dismantled while the St. John’s Ambulance Service providing medical care also moved out yesterday. Several organisations involved in the protest such as the Black Cap Movement and the Collective of Social Media Activists releasing statements said they have also decided to move out.

While many activist groups have since vacated the grounds, some holding a press conference on Wednesday said they will not move despite the Police warnings.

Nevertheless giving the protestors a respite, the Attorney General today told the Court of Appeal that the camp site at Gotagogama will not be removed till 10 August in the absence of the necessary legal provisions.