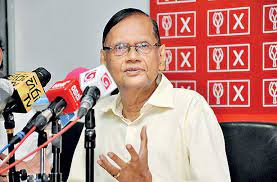 SLPP MP Prof. G.L. Peiris yesterday said that the government rebels in the opposition ranks were not given time to speak in Parliament.

Speaking to the media at the Parliament ground, Prof Peiris said that the government accused of suppressing the voices of people has now extended its grip of silencing the critics in Parliament by not allocating time to the opposition MPs to speak in debates.

Prof Peiris said that time in debates was not allocated to 13 SLPP MPs who joined the opposition ranks. “Today the debate in the House was on strategies to increase the national income. MPs of our group are not given time. This is deliberate silencing of the critics of the government.” he said.

It is useless to talk about the privileges of a Member of Parliament if the fundamental right to speak is violated. This is a total disruption of the Parliament democracy.

Prof Peiris said that the MPs who had been deprived of participating in the debates would write to the Commonwealth Parliamentary Association, Inter-Parliamentary Union and the SAARC member nations of the unjust act.