Having my entire clan being displaced from my ancestral home Palaly since 1990, and having heard the displacement woes of my people from my mother down to my young nephews and nieces, and having worked for Tamil refugees as well as other international refugees in my early professional life; and as a volunteer activist in the UK up to now for the welfare of refugees and the displaced, I think I have earned my feather to comment on  Chief Minister of Northern Province Mr.C.V.Vigneswaran’s attempt to highlight the plight of refugees and the displaced, some of whom anguishing for good 25 years or more in refugee or displaced camps and shacks denied of decent living.

People of my village and neighbouring villages including Myliddy, Urani to the west of Palaly,  and Valalai, Idaikaadu to the east and many other similar security forces-held areas throughout North and East (NE) have been denied of livelihoods in their own ancestral lands and homes; they are living in abject poverty, confronting social issues that permanent displacement brings forth, not being able to make a living in the vicinity or camp they are thrown into, not being allowed to fish or farm and ply their traditional trades in their own usual habitats, deprived of access to decent schools and hospitals for children and above all not being able to live among their close relatives and village neighbours which is cruel and violation of their human rights.

Though a good 6 years have gone since the end of war, the authorities having heaped praises on themselves for their gallant and brave victory against a rebellion which their predecessors themselves seeded, the Sri Lankan authorities still unsure on releasing the lands, properties and villages to the people who originally owned them.

Such authority-inflicted woes cannot be tolerated in a civil society and having acknowledged at the august 2015 Geneva Human Rights gathering their own past misdeeds and pleading for another chance to alter the underlying causes that seed continuous strife and conflicts within Sri Lanka for the last six decades, especially between the local communities and the majority state apparatus such as the security forces; one wonders how genuine the Sri Lankan authorities promise to the international community of reformed approach and appraisal of issues that seed conflict.

First and foremost on the list for prioritised attention and action for the SL authorities: i) is the occupation of land and property of Tamils, including prime farm lands and coastal fishing habitats., ii) also to prevent further land grab for permanent presence of camps and military establishments amid the localities.

Let us set aside for moment the core issues including i) Permanent Settlement on Tamil aspirations , ii) Constitutional change to accommodate that, and iii)  Removing PTA; and also other most pressing issues including a) the missing persons,  b) prisoners held under PTA, c)those incarcerated behind clandestine jails and torture chambers dotted all around the island and so on.

At least two questions that beg decent defence from the SL authorities is:  i) how deep is the authorities commitment to creating a new path to freedom, democracy and prosperity in SL through resolving ethnic crises that was imploding within SL for almost six decades?  ii) How reformed are the authorities to move away from largescale Human Rights violations? Iii) How sensitive enough authorities are to act on those persisting HR violations and also set new standards on HRs so the past bloodiest deeds never repeated in future?

It seems, as the CM Vigneswaran has highlighted during his visit to Vali-North’s displaced and refugee camps, that the SL authorities have a lot to aspire for and act upon if they really and genuinely want to even make small moves in response to the questions raised in the above paragraph.

Simply appointing provincial or district based study and review bodies to look into those most urgent land related issue is not good enough. It may suffice to the southern liberal aspirations to convince them and perhaps the acutely watching international community that they are on course to address these issues.

Though welcome that a systematic approach is set in motion that will eventually not immediately tackle widespread land and private property disputes between people of dire straits of N&E and the hidden hands of the security apparatus who want to maintain the status quo i.e. not releasing lands and instead sit tight on their war kitty; yet we have a duty to remind in good faith to the national government promotors and articulators that be it a a) non-action, b) slow action  or c) pretence of action; all will haunt you at the halls and walls of Geneva human rights gathering next time round.

The authorities’ wishful claim for good governance from their past deeds will be judged on performance and not pretence. We also must point out that promising or providing land elsewhere away from peoples own lands and habitats, again part of the human rights violations they will be judged on. 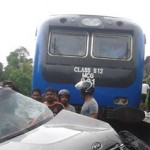 - Previous article « Train rams into car in Jaffna, 1 killed, 3 injured
Next article - ​Questions over attack on Maldives man in SL »