Recommendations by UN’s Rita Izsák to be implemented

The Government today said that action will be taken to implement the recommendations to Sri Lanka by the Special Rapporteur on Minority Issues, Ms. Rita Izsák, in consultation with the relevant stakeholders.

Sri Lanka’s Ambassador and Permanent Representative to Geneva Ravinatha P. Aryasinha said that Rita Izsák’s Report on her visit to Sri Lanka is being studied carefully.

He said that with Sri Lanka’s renewed commitment towards greater engagement with human rights mechanisms and the international community, and the promotion and protection of rights in the context of ensuring non-recurrence of conflict, action will be taken to implement the recommendations in consultation with the relevant stakeholders.

Aryasinha was speaking as a concerned country after Rita Izsák presented a report to the UN Human Rights Council today during the 34th session in which she commented on her visit to Sri Lanka in October last year.

In her report, Ms. Rita Izsák notes that five months have passed since her visit to Sri Lanka, when she urged the Government to seize the momentum and to put in place some immediate, important and concrete measures to clearly demonstrate its political will and commitment to better protect the country’s minorities.

“Today, I repeat this message. Unless those critical issues which are among the most pressing and emotive, especially for the Tamil and Muslim communities – such as those relating to demilitarization, disappeared persons, land return and security-related detainees – are immediately addressed, there is a real risk that this hard-earned momentum would be lost,” she said.

Izsák says the constitutional reform and the transitional justice process present an unprecedented opportunity to address the past, regenerate trust at all levels of society and shape a common vision of the future for Sri Lanka. She says it is an opportunity to strengthen and rebuild the Sri Lankan identity, to foster a stronger sense of belonging and togetherness of all Sri Lankans.

“It will be crucial to build in a strong minority rights regime in the governance structure, putting in place legal and institutional guarantees for equality and non-discrimination for all. The protection and realization of the rights of minorities are instrumental not only to reduce communal tensions but are essential components of good governance,” she added.

Izsák said it is her sincere hope that, in its efforts to achieve national reconciliation and an inclusive society, the Government of Sri Lanka will implement the recommendations outlined in her report with a clear vision and road map, with timelines as necessary, including the eventual establishment of a Minorities Commission 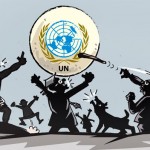