The Rs. 5000 allowance paid in April and May to the public as an assistance to face the coronavirus crisis, is not likely to be paid in June following complaints to the National Elections Commission.

The Government had decided to pay a Rs. 5000 allowance for the month of April and May for people affected by the coronavirus.

Cabinet co-spokesman Bandula Gunawardena said that the payment of the allowance might be suspended as the National Elections Commission had raised some concerns.

He said that the Commission had informed the Government it received complaints from some political parties over the payment of the Rs. 5000 allowance at a time an election has been declared.

Gunawardena insisted that the payment was not made with the intention of securing votes.

However, he said that the Government will respect any order issued by the National Elections Commission and suspend the payment in June, if such a need arises. 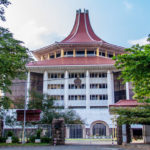