India on Wednesday called on Sri Lanka to meet the Tamil minority’s expectations for greater devolution of powers as part of the reconciliation process even as it committed itself to greater cooperation aimed at boosting the island nation’s post-Covid-19 recovery efforts.

External affairs minister S Jaishankar, who is in Sri Lanka for his first overseas visit of the year, raised the expectations of the country’s Tamils during a joint media interaction with his counterpart Dinesh Gunawardena. He reiterated India’s backing for Sri Lanka’s reconciliation process and an “inclusive political outlook” that encourages ethnic harmony.

Acknowledging the immediate challenge of post-Covid-19 recovery, Jaishankar said India will “always be a dependable partner and a reliable friend” that is open to strengthening ties on the basis of “mutual trust, mutual interests, mutual respect and mutual sensitivity”.

“As we promote peace and well-being in the region, India has been strongly committed to the unity, stability and territorial integrity of Sri Lanka. Our support for the reconciliation process in Sri Lanka is long-standing, as indeed for an inclusive political outlook that encourages ethnic harmony,” he said.

Jaishankar pointed out it was in Colombo’s own interest to fulfil the Tamil minority’s expectations for “equality, justice, peace and dignity within a united Sri Lanka”. He added: “That applies equally to the commitments made by the Sri Lankan government on meaningful devolution, including the 13th amendment of the Constitution. The progress and prosperity of Sri Lanka will surely be advanced as a consequence.”

The aspirations of Sri Lanka’s Tamil minority, a key political issue in the Indian state of Tamil Nadu, had also been raised by Prime Minister Narendra Modi in a virtual summit with his counterpart Mahinda Rajapaksa last September. At the time, the Indian side had called for the full implementation of the 13th amendment, which is an outcome of the 1987 India-Sri Lanka peace accord aimed at devolving more powers to the Tamils.

Rajapaksa and his brother, President Gotabaya Rajapaksa, have shied away from committing to full implementation of the amendment. They have also indicated they won’t go against the wishes of the Sinhala majority while working on any resolution in Tamil-inhabited areas.

In his remarks at the media interaction, Gunawardena noted that President Rajapaksa had firmly stated his commitment to the well-being, progress and opportunities of all Sri Lankan citizens, including Sinhala, Tamils and Muslims.

Jaishankar said he and Gunawardena had discussed several proposals for cooperation in energy, infrastructure and connectivity, and the early implementation of such projects would help accelerate Sri Lanka’s recovery from the impact of the pandemic. He also promised a speedy follow-up to talks on possible Indian investments in special zones for manufacturing pharmaceuticals and tourism.

Gunawardena thanked India for its support to mitigate the impacts of the pandemic. “The Indian government’s ‘neighbourhood first policy made a very positive impact on our health sector and the economy during the critical period [of] unprecedented crisis…,” he said.

Jaishankar is visiting Sri Lanka during January 5-7 at the invitation of Gunawardena. The external affairs ministry said the visit reflects the priority attached by both countries to strengthening relations in all spheres. 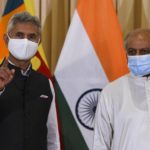 Next article - Revision to the electoral register 2020 »