Several leaders of Tamil political parties, who met India’s Minister of External Affairs, Dr. Subrahmanyam Jaishankar, have urged India’s support in developing the North and East and the plantation sector.

They also welcomed India’s stance on the 13th Amendment, that was reiterated by the Indian guest.

Leader of the Tamil Progressive Alliance, Mano Ganesan, urged the Indian politician to restart building houses for the plantation sector as in the past and developments in the plantations have been less focused by the State sector.

He also reiterated the ferry service between Rameswaram and Mannar and Tuticorin and Colombo be implemented as per the suggestions tabled by both countries.

MP Ganesan also pointed out that the Indian-built Glengan Hospital in Hatton would need at least two PCR testing machines.

Welcoming India’s interest in having the 13th Amendment implemented, he also said the Tamil Progressive Alliance has made some suggestions to be incorporated in the new Constitution the Government is hoping to introduce.

He also pointed out Indian Prime Minister Narendra Modi has shown his immense concern about the Tamil people, and he was welcomed overwhelmingly by the Upcountry people during his visit.

MP S. Radhakrishnan and several others also met Dr. Jaishankar. Meanwhile, Minister of State for Plantation, Housing and Community Infrastructure, Jeevan Thondaman, also met the Indian Foreign Minister and they discussed the development projects and housing projects in the plantations with the funds offered by India.

The Indian Minister assured that India would continue to assist in the livelihood development of Upcountry Tamils. India’s cooperation in education, health and sports development will continue, Dr. Jaishankar added.

The representatives of the TNA also met Dr. Jaishankar at India House, but the discussion was not open to the Media. 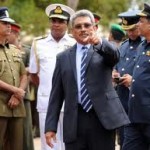 - Previous article « “Yes, I Am Nandasena And Gotabhaya: I Have Two Characters: I Can Respond In Any Way They Want” President Says In Ampara