Arrest Bahu or not Police to decide today

Dr. Vickramabahu Karunaratne, has been summoned by police for questioning on certain irregularities detected by Elections Department officials, since receiving his nominations list for the Gampaha District.

After questioning him, the police will take a decision today on whether to arrest him or not.Dr. Karunaratne, who is also the Secretary of the party, has signed the nominations list and that is why he had been summoned by police to answer some questions pertaining to the list.

Bahu’s explanation is that it is a conspiracy against him. However, it in indisputable that he himself has signed the nomination list, which he does not deny to be the original list he submitted, senior police officers said.

“Moreover, if it was not a conspiracy hatched by the government, it had to be the people in his own party who should be held responsible. But, he cannot slip out of the problem with such a flimsy excuse,” a police officer said.
NSSP Group Leader, L.K. Indrasoma Wickremasinghe, who handed over the nominations list to Gampaha District Secretary, J.J. Ratnasiri, did so at the last minute, sharp at 11:59 on 6 February when nominations were to close at 12 noon.

By noon that day, 13 political parties and nine independent groups had filed nomination papers. Half an hour’s time given for objections had also passed without any objections being raised. Therefore, the District Secretary accepted all nomination papers as in order.

Problems regarding the NSSP nomination list arose after it was duly accepted by the District Secretary. According to relevant election law, neither the Elections Commissioner nor any of his officials has authority to reject or take any other action in respect of a nomination list at that stage. Any irregularity found at that stage had to be reported to police for investigations. Accordingly, at 1:40 p.m. on 7 February, Gampaha Asst. Elections Commissioner, P.A. Sunil Senaratne, filed a complaint with the Gampaha Police Crimes Investigation Division, regarding this matter. He had requested police to investigate some discrepancies found in the NSSP nominations list in regard to NIC numbers of certain candidates in the list.

According to police sources, an officer in the District Secretariat Office had discovered some suspicious information regarding the address of one candidate in the list. Residents of the address were personally known to the officer and therefore, he was certain that the person using that address was not resident there.

By way of verification he had checked with the family who were known to him and got further confirmation that the person who had used their address was unknown to them. When he informed it to his senior officers, they made a careful check of the NSSP nomination list and as a result, found several discrepancies with regard to NIC numbers too. With this police launched immediate inquiries under section 66 of Election Act No. 2 of 1988.

Of the 43 candidates nominated by the NSSP in the Gampaha list, group leader L.K. Indrasoma Wickremasingha was the first person summoned by police for a statement. 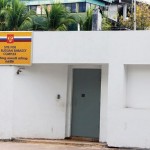 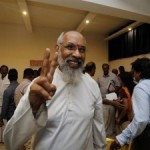