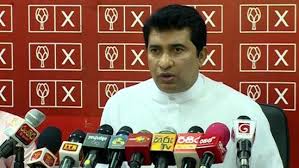 Speaking to media in Kandy the State Minister said Provincial Councils exist at present without public representatives, adding that activities and productivity is minimal.

State Minister Ranasinghe added concerns will arise if officials engaging in management duties resort to fulfilling duties that a politician is expected to execute.

He therefore highlighted the importance of public representatives to Provincial Councils.

The State Minister charged that elections were delayed by the good governance government and vowed to ensure the conduct of elections as a government on the directives of the President and Prime Minister.

On a separate note State Minister Roshan Ranasinghe said the former government came into power labelling the then government as thieves, and charged the good governance government of causing the controversial Treasury bond transactions and other financial malpractices.

He also claimed that national security was compromised under the former government.

The State Minister said the economy that was at a 7.2% growth rate when being handed over by the Mahinda Rajapaksa led government, was handed back in 2019 having dropped to 2.7%.

He charged the good governance government of being one of the worst governments to date.

State Minister Ranasinghe also claimed the Leader of the Opposition should have inquired into public grievances during his term as a Minister adding that the public is fully aware of his pretences.