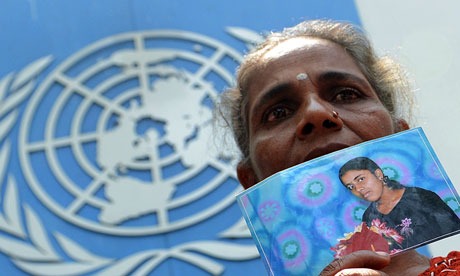 56th Session of the UN Commission on Human Rights, Geneva 2000, Item 10
Economic, Social and Cultural Rights of Tamils in Sri Lanka
The armed confrontation between the government’s security forces and the Tamils in the North and East of the country has claimed since 1983 more than 55.000 lives (90 % of them civilians), over 700 000 internally displaced persons and close to half a million expatriates: almost all of the victims are Tamils. The conflict is the result of the long standing violations of the rights of the Tamils by successive governments. And, as the 1998 report of the Committee on Economic, Social and Cultural Rights observes, discrimination remains the central issue in the armed conflict in Sri Lanka.
The history of independent Ceylon/Sri Lanka is the history of the majority community of Sinhalese (74% of the population) imposing itself by means of its electoral weight as the nation‘ at the expense of the other ethnic-cultural groups [mostly Tamil speaking Muslims (7.6%) and Tamils (18.1%), seven out of ten belonging to the indigenous Sri Lankan Tamils‘ concentrated in the North-East as against the remaining 30% consisting of Indian Tamils’in the up-country].

Some of the very first acts after independence was achieved in 1948 were directed against the Indian Tamils, mostly descendents from 19th cent. migrants from India for work on the plantations in the Southern and Central part of the island, who then formed one half of the Tamil population. Thus, not only were existing restrictions in their access to certain professions, such as agriculture, fishing and transport, confirmed, but new measures were taken which while reducing the number of respective Tamil managing personnel accorded preferential employment in the public sector and on the plantations to Sinhalese.

The „Citizenship Act“ of 1948 followed by the „Indian and Pakistani Residents Act“ and the „Ceylon (parliamentary elections) Amendment Act“, both of 1949, rendered the majority of Indian Tamils first stateless, made their naturalisation almost impossible, and deprived them of the right to vote which they had enjoyed for more than 20 years. As a result, the political clout of the Tamils was drastically diminished and new employment possibilities for Sinhalese were openend up (against today’s share of 1/3, the Sinhalese represented less than 1/8 of the estate labour force between 1946 and 1953). Eventually, a majority of Indian Tamils was made to leave the country consequent upon various agreements with India, so much so that the share of Indian Tamils in Sri Lanka fell from 12 % (1946/1953) to 5,5% of the population. While these were to obtain Sri Lankan citizenship, there are still today 85.000 Tamils of Indian origin possessing neither Indian nor Sri Lankan citizenship about whose denial of fundamental human rights, including access to basic services such as education, the Committee on Economic, Social and Cultural Rights expressed its concern in the concluding comments of its June 1998 report on Sri Lanka.

Next came the turn of the Sri Lankan Tamils. Separated by culture (Dravidian), language (Tamil), religion (Hinduism), and settlement area (North and East), they had been brought under an island-wide government only in the 19th cent. That this measure was introduced merely in order to facilitate the colonial administration, and neither signified nor led to an economically and socio-culturally integrated society testify the (colonial) constitutions since 1931 heralding self-government (Donoughmore, Soulbury) with their explicite safeguards for the minorities. Very densely populated (the Jaffna peninsula counted 940 inh./km² at the last census in 1981), plagued by landlessness, water-deficiency, and practically devoid of any modern industry (80 % are concentrated in and around Colombo), the Sri Lankan Tamils have traditionally flourished on fishing, and on the export of agricultural products (rice, vegetables, spices) and of (highly qualified, English speaking) manpower (to Colombo as well as abroad). The language and education policy of independent Sri Lanka drastically curtailed these chances of gaining a livelihood, and seriously infringed upon the social, economic and cultural rights of the Tamils.

Thus, the „Official Languages Act“ of 1956 proclaimed Sinhala the sole official language of the country; with later legislation restricting the use of Tamil in various fields of administration even further. The final recognition of Tamil as a ‚national language‘ in the 1978 constitution, does not alter the systematic discrimination. Thus, at police stations in Colombo, everything is recorded in Sinhalese, so that Tamils are obliged to sign statements written in a language they can’t read. And the Centre for the Independence of Judges and Lawyers notes, that ‚the access to justice of Tamil-speaking parties to proceedings and lawyers is seriously restricted by the lack of interpreters, by delays in publishing legislation and Emergency Regulations in Tamil, and by the absence of Law Reports and textbooks in Tamil‘.

In 1973, the ethnic bias in language policy was complemented by ‚standardisation of education‘, an admission policy to higher education which severely limited the chances of Tamils students. Meanwhile, outright neglect of Tamil medium schools even at lower levels has been reported. Thus, according to the Ceylon Tamil Teachers Union there are 470 technical and vocational courses in Sinhala, but only 65 in Tamil; in the Vanni, there are no technical colleges at all; against eight courses in computer studies offered in Sinhala, there is but one in Tamil, and none at all in vocational and technical education in radio and TV technology, electronics and motor vehicle maintenance. Officially, there was a shortage of 10.000 Tamil medium teachers in 1996. But only 4000 have so far been appointed despite the availability of funds from the World Bank and the Asian Development Bank. By contrast, inspite of a surplus of 14.000 Sinhala medium teachers, another 10.000 have been recruited.

As a result, the employment pattern in administration and state enterprises has become decidedly mono-ethnic: the Sinhalese represent today 93 % of all government servants and 99% of the armed forces (in 1956 40 % of the latter were Tamils). Excluded, the Tamils, by contrast, have been effectively driven into unemployment, abroad or into rebellion.

The constitution of 1972 (Art.6) accorded to Buddhism, the religion of the Sinhalese majority, „the foremost place“, a provision reaffirmed in the 1978 constitution (Art.9) as well as the constitutional proposals of 1997/8 (the latter even providing for a ‚Supreme Council‘ of Buddhist Clergy to advice the government). It marks a decisive departure from secularism and the proclaimed multi-culturalism in a society where 15% of the population are Hindus, and 7 % each confess to Islam, Christianity respectively. It is but another step in the identification of the majority with the nation as such, as became clear when in 1974 the then and today’s Primeminister, Mrs. Sirimavo Bandaranaike, declared Anuradhapura a Sacred Buddhist Area, in consequence of which all Hindu temples in the vicinity were demolished. The burning in 1981 of the Jaffna Historic Public Library by the Sri Lankan army and police not only destroyed this repository of some of the most valuable manuscripts and books on the history and culture of Sri Lankan Tamils. It was an attempt on the latter’s cultural identity and, thus, on the people itself.

In the course of the government’s peasant colonization schemes, about a quarter of the island’s population, overwhelmingly Sinhalese peasants from the South, is thought to have been moved since 1946 from the Wet to the Dry Zone (North-Centre, East). The ethnic composition in the North and East which the Tamils for historical and demographic reasons regard as their traditional homeland was thereby drastically altered: in 1881 the Sinhalese accounted for less than 2% of the population in these two provinces; by 1981, their share had increased in Trincomalee District to 33.6% and to 38% in Amparai District, whereas the respective proportion of Tamils decreased from 57 to 34 and 37 to 20%.

Starting in Amparai district in 1956, these resettlement schemes were often accompanied by forceful evictions of long-time Tamil villagers, amounting to ethnic cleansing (e.g. Gal Oya). As a result, the demographic continuity of the Tamil region was disrupted, while the creation of almost exclusively Sinhalese majority areas gave rise to two new Sinhalese electorates by the late 1970s. Analogous events took place in the early 1980s in Trincomalee District as well as in the Northern Province where under the Mahaveli Development Scheme exclusively Sinhalese peasant colonies were established in the Manal Aru area at the expense of over 3000 evicted Tamil families. There, the traditional Tamil names were not only replaced by Sinhalese ones (Manal Aru by Weli Oya, Thannimurippu by Janakapura), the oppressive nature of the state’s colonisation manifests itself, moreover, in that the 25.000 new Sinhalese settlers were given arms and army camps were additionally contructed in the neighborhood. As for the Tamils, similar government sponsored regroupings into Sinhalese dominated districts did not occur.

The Internally Displaced Persons (IDP), particularly in the Vanni, a rural and forest area in the North, present another case of denial of human rights to Tamil people. As a result of the war, 50 % of the district‘s 250.000 original inhabitants has been displaced and another 250.000 people have entered the area. Unemployed and penniless as most of these half a million people are, they depend on the government for survival. Thus, there are only 8 physicians, no dentists, no gynecologists or paediatrician. Cultivable area in 1998 had been reduced to one fifth or less of what was available in 1994. The land shortage has been compounded by an economic embargo that –theoretically applying only to potentially military items- has led in practice to restricted supplies of fertilizers and chemicals, kerosene and agricultural machinery, etc. Fishing, the other major source of livelihood, stands officially banned. In consequence, many people, 400.000 according to Government Agents, depend on the government, i.e. are eligible for dry rations. However, in line with other accounts, the 1997 and 1998 reports of the US Committee for Refugees conclude, that the supply of food and medicine by the government has been consistently inadequate, with the situation in the government detention camps, where 40.000 families are housed with 5-8 persons living in shelters of 8 x 10ft, reportedly being even worse. In consequence, malnutrition, anemia, low birth rates, and a return of malaria have been observed. Such withholding of necessary basic supplies are in clear violation of human rights and humanitarian law which can in no way be justified by the war.

In order to put an end to these multiple denials of economic, social and cultural rights, the Society for Threatened Peoples asks the United Nations Commission for Human Rights:

To put pressure on the Sri Lankan government to end its employment of food and medicine as weapons of war, and to adequately supply forthwith the internally displaced persons in the country, particularly in the Vanni, according to human rights and humanitarian law;

To recognize the long-standing systematic pattern of discrimination against the Tamils by successive Sinhalese dominated governments;

To take into account this violation of economic, social and cultural rights of the Tamils as the root cause for the present armed conflict while deliberating the human rights situation in the country and measures to improve it;

To take into consideration that economic, social and cultural rights are not only invariably and intimately linked to political and civil rights, but that the rights of minorities are neither safeguarded in a formal democratic set-up, nor can they based on individual rights. What is urgently needed are collective rights.