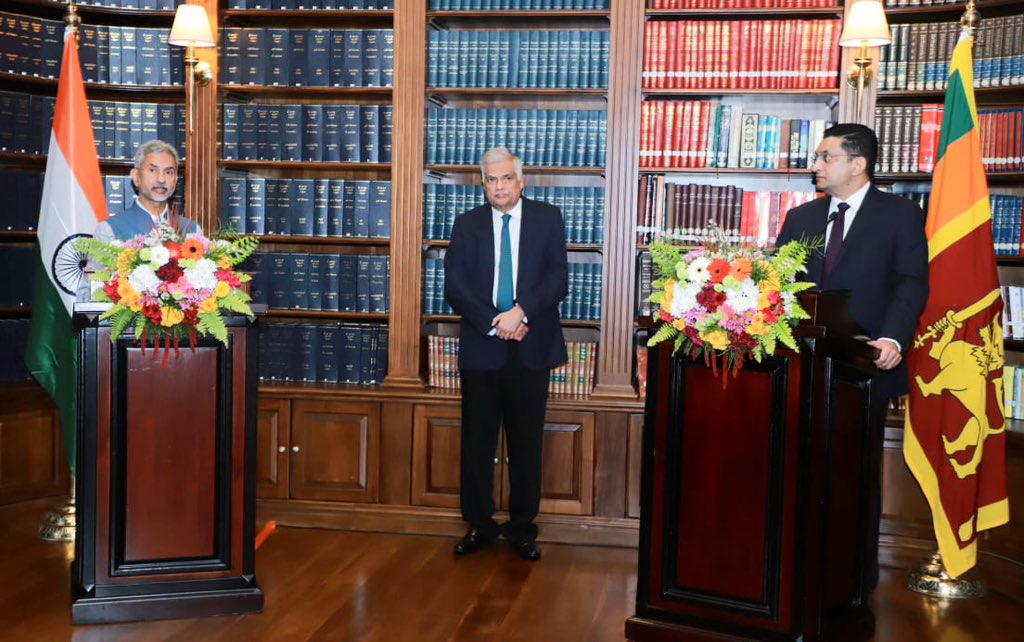 Indian External Affairs Minister Dr.S.Jaishankar’s two-day visit to Sri Lanka that concluded on Friday, has underscored and re-affirmed India’s role as the first responder during crisis situations in Sri Lanka.

The visit, which included a meeting with President Ranil Wickremesinghe, raised hopes that India-Sri Lanka cooperation in a variety of economic sectors will increase. Jaishankar has offered further Indian investments and has appealed to the Sri Lankan authorities to create a business-friendly environment that will help attract Indian investments.

Jaishankar told a media briefing that the primary purpose of his visit was to express India’s solidarity with Sri Lanka during these difficult moments when the island nation is facing a deep financial crunch.

“As you all know, last year, India extended about US $ 4 billion in terms of credits and rollovers to help Sri Lanka get through an economic crisis. For us, it was an issue of ‘Neighborhood First’ and not leaving a partner to fend for themselves.”

“This year, in a developing situation that was beginning to cause concern, the same sentiment reasserted itself. We felt strongly that Sri Lanka’s creditors must take proactive steps to facilitate its recovery. India decided not to wait for others but to do what we believe is right. We extended financing assurances to the IMF to clear the way for Sri Lanka to move forward. Our expectation is that this will not only strengthen Sri Lanka’s position but ensure that all bilateral creditors are dealt with equally,” Jaishankar said.

The Indian External Affairs Minisiter stressed the importance of FDIs for the recovery of economies and said: “Sri Lanka’s pathway is one of a strong economic recovery propelled by greater investments. India will encourage greater investments in the Sri Lankan economy, especially in core areas like energy, tourism and infrastructure.”

Jaishankar then stated an important point – a flaw in the attitude of successive Sri Lankan governments’ FDI policies. He said: “We count on the Government of Sri Lanka to provide a more business-friendly environment to create a powerful pull factor. I am confident that the gravity of the situation is realized by policy-makers here.”

The Indian Minister laid out the areas in which Sri Lanka could count on Indian help. He particularly mentioned connectivity, energy and the development of Trincomalee as an energy hub.

“Energy security is today one of Sri Lanka’s most serious challenges. A search for solutions must necessarily encompass the larger region. Only then will Sri Lanka get the full benefit of scale. This country has enormous renewable energy potential that can become a sustainable source of revenue.”

“India is prepared to be a reliable partner on such initiatives. We have today agreed in-principle on a renewable energy framework that would take this cooperation forward,” Jaishankar said.

Recognizing the tourism is the life blood of the Sri Lankan economy, Jaishankar noted that Indian tourists are expressing their “positive sentiments for Sri Lanka in a very practical manner by coming here.” But more will come if connectivity is improved and if Indian tourists are able to make payments in Indian Rupees and the utilization of UPI would be most helpful in this regard, he added.

Indian Rupee payments will also boost Indo-Lankan trade, he said. “In a turbulent world, it is essential that India and Sri Lanka steady their trade. The use of rupee settlement for trade is obviously in our mutual interest,” Jaishankar said.

On political issues in Sri Lanka in which India has been historically interested, Jaishankar said that India has always supported both the political and economic stability of Sri Lanka. He said that he told President Wickremesinghe that the full implementation of the 13th amendment of the Sri Lankan constitution which devolves powers to the provinces will promote reconciliation and national stability. He also stressed the need for the early conduct of provincial elections. Durable efforts towards reconciliation are in the interests of all sections in Sri Lanka, he added.

Referring to the Indian Origin Tamils, he said that he spoke to the President about the need to pay “special attention” to the requirements of this community.

Jaishankar then sad that he had handed over to Wickremesinghe, Indian Prime Minister Narendra Modi’s invitation to visit India “at an early date to discuss how our partnership can facilitate Sri Lanka’s strong recovery.”

In conclusion, Jaishankar underlined that India is a “reliable neighbor, a trustworthy partner, one who is prepared to go the extra mile when Sri Lanka feels the need.”

“My presence here today is a statement about Prime Minister Modi’s commitment to Neighbourhood First. We will stand by Sri Lanka in this hour of need and are confident that Sri Lanka will overcome the challenges that it currently faces,” he said.

In his statement to the media, the Sri Lankan Foreign Minister Ali Sabry expressed “profound gratitude” to the Indian Prime Minister, External Affairs Minister and the Indian people for their “enormous support” when Sri Lanka was facing the most serious economic crisis in its history. He appreciated India’s official offer of financial assurances at a time when Colombo’s talks with the IMF for a relief package were at a crucial stage.

Sabry said that Sri Lanka is watching India’s growth with great interest as in its view, India’s growth is good for the region and Sri Lanka. He congratulated Prime Minister Modi and Jaishankar for giving an “intellectual impetus” to a new foreign policy.

Jaishankar in the Maldives

Earlier, during a visit to the Maldives, Jaishankar signed agreements. MVR 100 million grant will be given for high-impact community development projects, under which a sports complex will be constructed in Gaafu Dhaalu Gadhdhoo. There is an agreement for assistance and cooperation between the Maldives National University and Cochin University in India. India also made a donation of two sea ambulances. He inaugurated the Indian-aided Hanimaadhoo Airport Development Project. The Hanimaadhoo Airport project will connect the world with the northern islands of the Maldives.