Herath tweeted calling on the Sri Lanka Foreign Ministry to look into reports that China had warned Bangladesh of “substantial damage” in bilateral ties if the latter joins the Quad.

He was responding to a report by the Observer Research Foundation which stated that in May, in another brazen display of its ‘wolf warrior’ diplomacy, China issued a strange warning to Bangladesh, a nation that it has tried to cultivate assiduously over several years.

While suggesting that China considers the Quad to be a minor anti-China initiative, the Chinese Ambassador to Bangladesh, Li Jiming, had reportedly warned Dhaka that there will be “substantial damage” in bilateral ties between China and Bangladesh if the latter joins the Quad.

It was an extraordinary statement by a diplomat in a host nation but it had all the chutzpah that Chinese diplomats think they deserve to embed in their seemingly non-diplomatic outpourings, the Observer Research Foundation had said. 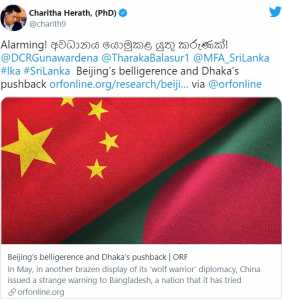