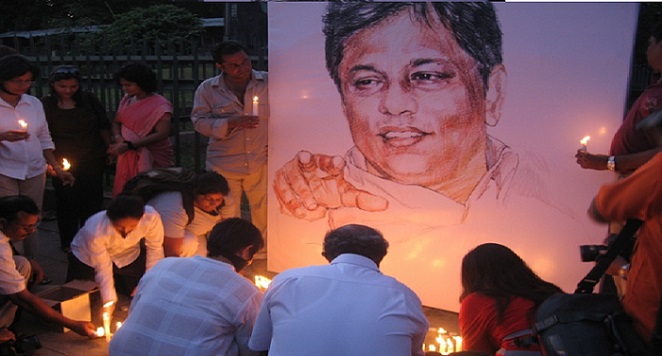 The People’s Tribunal on the Murder of Journalists at The Hague, the Netherlands, yesterday (19) issued an indictment against the Government of Sri Lanka (GoSL), which it found guilty over the murder of editor and Attorney-at-Law Lasantha Wickrematunge.

Judge Eduardo Bertoni, who is part of the panel of judges of the Tribunal, noted that the indictment was filed on the basis that the prosecutor holds the Democratic Socialist Republic of Sri Lanka responsible for the grave violation of the international human rights of the slain journalist.

While reading the indictment, Judge Bertoni highlighted: “The Government violated Wickrematunge’s right to freedom from discrimination based on political opinion.”

Judge Martina Forti, highlighting Wickrematunge’s case, stressed that the audacious attack on one of Sri Lanka’s best known and most outspoken journalists shows a larger problem that independent-minded journalists in Sri Lanka faced during that time and are still facing today.

She noted that the Tribunal session was held on 12 and 13 May 2022, in The Hague. Over the two days of the hearing, testimony and documentation were presented regarding the extrajudicial killing of 27 journalists and 17 media workers between 2004-2010, out of which at least 35 were Tamils.

“These killings have not been effectively investigated and the perpetrators were not convicted, while most journalists are believed to have been killed because of their criticism of the Government, the decades-long civil war or because they supported the Tamils,” she said.

Further, she said: “We must note that in none of the cases of murder, assault, and disappearance has there been any conviction. On the contrary, in some of them, the military personnel who were named and charged in these crimes, have been pardoned and reinstated.”

Wickrematunge was assassinated on 8 January, 2009, by unidentified gunmen riding motorcycles in Ratmalana.