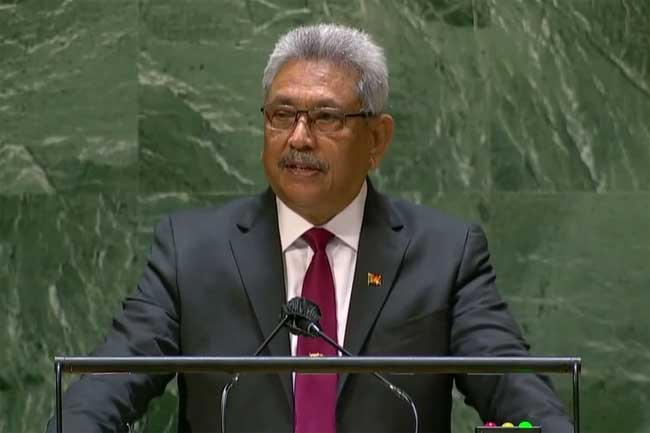 Basic human rights and liberal democracy are dismissed by the autocratic leadership in Sri Lanka. Such circumstances suppress the public from exercising their democratic rights on a daily basis. The predominantly active political class of Sinhalese Buddhists, who campaigned for and elected a Rajapaksa regime and once supported autocratic sentiments now seem to be questioning the regime’s behaviour. During the Presidential election in 2019, which came in the immediate aftermath of the Easter Sunday attacks, national security was the top concern. However, at present, individual security is threatened more than ever before, owing to an economic crisis overshadowed by a pandemic. To survive within Sri Lanka’s autocratic family rule is to remain in greater fealty to the ultra-nationalistic ethos projected in no uncertain terms by the Gotabaya Rajapaksa regime. Under this repressive environment, there will be a no freedom of choice due to a deep fear that has crept into every household in the country.

Shortage of essential food items at the height of the pandemic with the highest number of deaths recorded on the island happening simultaneously, the public is battling a two-way crisis. President Gotabaya Rajapaksa declared emergency regulations by enforcing directives, and appointing former Major General MDSP Niwunhella to take over as Sri Lanka’s Commissioner of Essential Services amidst an economic emergency. It is another military appointment which pushes the quasi democracy towards a complete autocracy, expanding the regime’s militarisation programme. This was a concern also raised by the UNHRC. With the present dysfunctionality, hopefully, Sri Lanka will not see another youth insurrection from its majoritarian Sinhalese Buddhists as seen in the past in 1971 and 1989, triggered by economic failure and political injustice where thousands of innocent lives were lost. The economic emergency allows authorities to control and seize stocks of staple foods; naturally, the current food shortage reminds the Sri Lankan public of the 1970s regime of Prime Minister Sirimavo Bandaranaike ending in 1977.

The predominantly active political class of Sinhalese Buddhists, who campaigned for and elected a Rajapaksa regime and once supported autocratic sentiments now seem to be questioning the regime’s behaviour.

There is a steep devaluation of currency due to a foreign exchange crisis. The Sri Lankan rupee crossed a historical high at Rs.231 to the US dollar, while 127 billion rupees were injected. The Sri Lankan rupee has fallen 7.5 percent against the US dollar this year and its month-on-month inflation rose to 6 percent in August, with significant borrowing where 80 percent of the revenue is for debt servicing, especially with continued borrowings from China. It has also reached out to many other nations including Bangladesh, which will provide US $200 million currency swap to assist the fast-depleting foreign reserves in Sri Lanka. Assessing the economic crisis, former Deputy Governor of the Central Bank, WA Wijewardena, says the economic situation has ‘graduated from a crisis to a total catastrophe now’, a free fall of the economy. The Central Bank acts as an advisory institution under such circumstances. Therefore, a new governor of the Central Bank was appointed, former State Minister Ajith Nivard Cabraal, a close confidant of Prime Minister Mahinda Rajapaksa to help limit the situation.

Dysfunctionality and the China tilt

A few weeks before the economic emergency, President Gotabaya Rajapaksa made a surprising cabinet reshuffle of a few key ministries, including Health and Foreign Affairs. The Health Ministry was in a disastrous state with multiple interventions aimed at health professionals by the regime. Health Minister Pavithra Wanniarachchi was shuffled to bring in Keheliya Rambukwella, a vociferous defender of the regime.

Foreign Affairs Ministry was the other crucial ministry that was reset. During the time of the former Foreign Minister, Dinesh Gunawardena, Sri Lankan foreign policy lost its balance and neutral posture tilting toward China. There is no positive sign even with the experienced new foreign Minister GL Peiris to change this direction and recalibrate its China bandwagoning foreign policy. The China tilt policy was reiterated at the recent 48th UNHRC session where Sri Lanka defended China’s human rights accusations, commenting ‘external forces should not seek to interfere in Xinjiang and Hong Kong, which are integral parts of the People’s Republic of China (PRC)’.

Weeks before, the strong bilateral economic cooperation was cemented at the diplomatic meeting between a high-profile delegation of the Parliament of the PRC and Sri Lanka, which took place in August 2021. The meeting was led by Basil Rajapaksa, the new Rajapaksa brother who joined the government taking over the position of the Finance Minister; this meeting also included many other strong political weights from within the government such as the new Foreign Affairs Minister.

The China tilt policy was reiterated at the recent 48th UNHRC session where Sri Lanka defended China’s human rights accusations, commenting ‘external forces should not seek to interfere in Xinjiang and Hong Kong, which are integral parts of the People’s Republic of China (PRC)’.

The Chairman of the National People’s Congress (NPC) Standing Committee Li Zhanshu said that the “Chinese government will do its utmost to help overcome the economic challenge as well as the COVID challenge in Sri Lanka”. Foreign Minister G.L Peiris requested Chinese assistance at the international arena by saying, “China has always stood by Sri Lanka as a close friend in the international arena and that he looks forward to the continued support in the future as well.”. The Foreign Minister’s request to protect the regime at the international forum will be taken up as a priority by the Chinese leadership.

The defence of Chinese human rights violations in a global forum is another ancillary ingredient apart from China’s ‘debt trap’ and vaccine dependency towards realising the Chinese ‘strategic trap’. While the Chinese embassy projects kudos by saying, “Well done! Sri Lanka the fastest vaccination speed in the world for the past week”, China also works on the economic recovery and enlarging the Chinese debt and ‘strategic trap’ in Sri Lanka. Deborah Brautigam, a Professor at the School of Advanced International Studies at Johns Hopkins University and Meg Rithmire, an Associate Professor at Harvard Business School assess that ‘After the construction of the port in Hambantota, for example, Chinese firms and banks learned that strongmen fall and that they’d better have strategies for dealing with political risk’. Perhaps, China’s risk assessment and learning have improved over time but it is not short of the ‘strategic trap’ in Sri Lanka.

The dysfunctionality and frustrations lent by the country’s mismanagement has left a fertile ground for multiple security threats to mushroom, including extremist terror. This threat is beyond borders. A month after the New Zealand Christ Church attack, Sri Lanka’s largest extremist terror attack took place. At that time, Sri Lanka’s State Minister of Defence was quick to call the Easter Sunday attack a retaliation for the Christ Church attack. Sri Lankan Easter Sunday attack is unearthing multiple new evidence. Cardinal Malcolm Ranjith, revealed at a recent press conference that a ‘Sri Lankan military intelligence officer, through a local agent and an unspecified person in Indonesia, had forced the terrorist group ISIS to claim responsibility for the Easter Sunday attacks’. These are serious findings, opening new dimensions about the attacks.

With the US exit from Afghanistan and the re-Talibanisation of the country, the regional security balance is under threat. It poses a stage for the return of extremist terrorism.

Ahamed Aathill Mohamed Samsudeen, the Sri Lankan who committed the heinous act of stabbing innocent civilians in New Zealand in September 2021, perhaps, had an indirect connection to terror cells in his own home town Kattankudy in the Eastern Province of Sri Lanka where Mohammed Zahran, the mastermind of the Easter attack preached an increasingly extremist version of Islam. In order to subvert such a movement from taking root, the current regime in Sri Lanka set the draconian Prevention of Terrorism Act, which allows arrests and surveillance in place. It employed strong bans including a ban on madrassas, ban on burqa, and forced cremations for a limited time. The consequences of these acts will predictably be the spread of islamophobia and the grooming of more extremists rather than the reverse of it.

With the US exit from Afghanistan and the re-Talibanisation of the country, the regional security balance is under threat. It poses a stage for the return of extremist terrorism. The absence of US counterterror operations will not be filled by China or Russia. For China, with its close Taliban/Pakistan relations, it will be a test on Chinese leadership for maintaining balance. India faces serious security threats from all directions—from its western borders from Pakistan, northern from China, eastern from Bangladesh and the South from Sri Lanka and Maldives. According to Shivshankar Menon, former Indian National security Advisor, “Afghanistan is not a threat to us. It has to come through Pakistan”. The dysfunctional nature of many other South Asian states presents a gap in robust counterterrorism mechanisms with a multijurisdictional approach and the absence of security architecture. This gap could make way for South Asia to become a hub for the extremist terrorist threats. In the case of Sri Lanka, the absence of social security for minorities is the root cause that should be addressed. If counterterrorism mechanisms are used for arbitrary detention as explained by UN Human Rights High Commissioner Michele Bachelet from her recent update on Sri Lanka and how the strict surveillance continues to be used, it will invite dangerous security concerns to the society and the region. With the absence of a holistic mechanism, Sri Lankan prisons will become breeding grounds for extremist terrorists.

The knee jerk decisions from the important cabinet reshuffle and appointment of a new governor of the central bank to increasing military appointments and arbitrary detention are definitely not moves in the right direction. The Rajapaksa’s repressive policies overshadow everything else, including the new appointments for course correction. The crass act of the regime’s own minister of prison was a clear evidence of moral values and dysfunctionality within the government. While liberal democracy is suppressed by Rajapaksa regime, the present dysfunctionality in Sri Lanka’s political-economic environment and its pro-Chinese foreign policy will have severe security impact on the entire South Asian region.