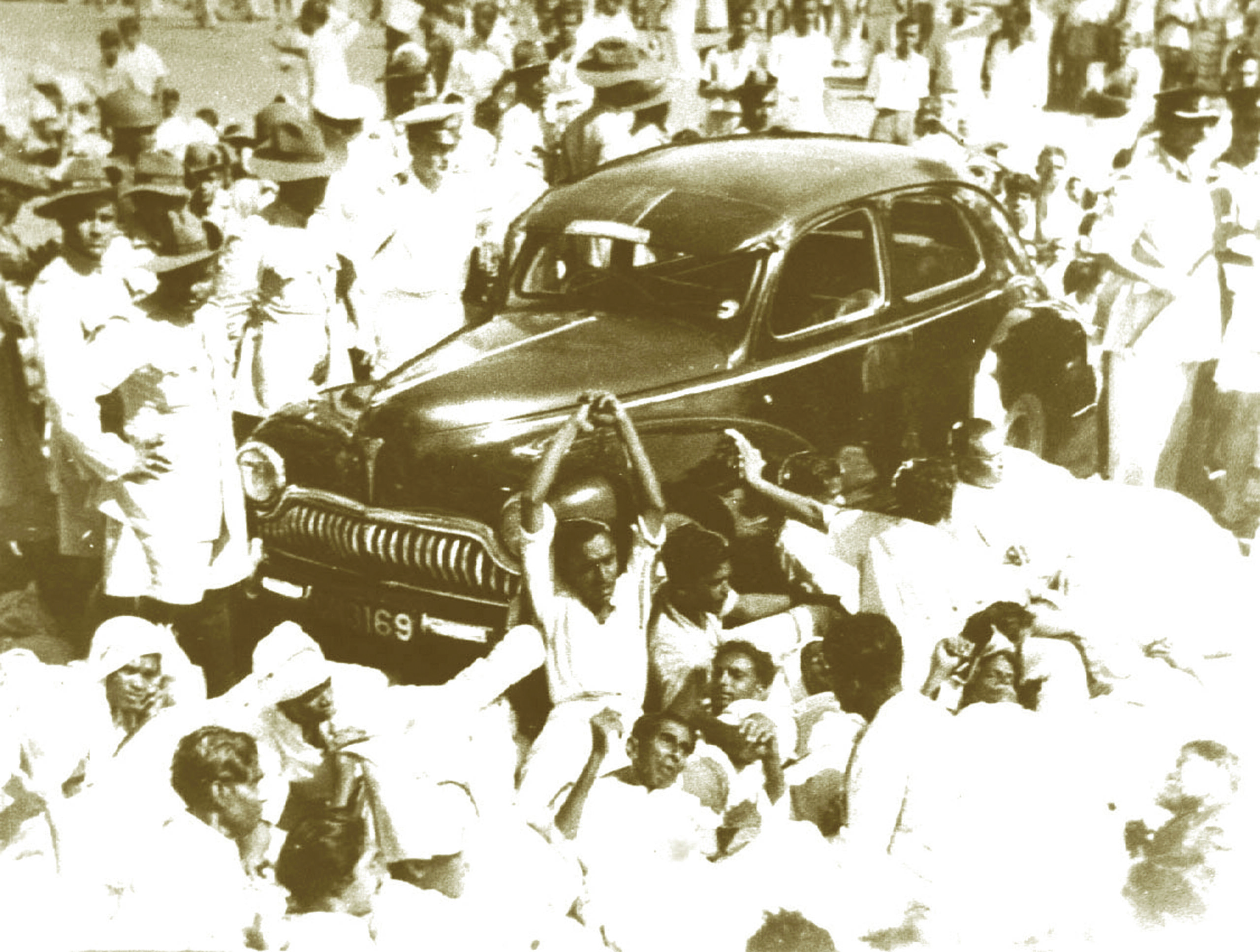 This week marks 65 years since Sri Lanka’s first anti-Tamil pogroms, when government backed Sinhala mobs murdered more than 150 Tamils across the island – the first of many massacres that were to take place in the decades to come.

As hundreds of Tamils, led by the Federal Party’s SJV Chelvanayakam, staged a satyagraha – peaceful sit-in protest – on Galle Face Green, they were set upon by a Sinhala mob.

“What happened?” recalled Somasundaram Nadesan, a leading Tamil lawyer and member of the Senate of Ceylon, two years later.

“Hooligans, in the very precincts of Parliament House, under the very nose of the Prime Minister of this country, set upon those innocent men seated there, bit their ears and beat them up mercilessly. Not one shot was fired while all this lawlessness to persons were let loose… Why? Orders had been given: ‘Do not shoot, just look on.’

Thereafter… every Tamil man was set upon and robbed. He was beaten up. His fountain pen and wristlet were snatched away. He was thrashed mercilessly, humiliated and sent home. The police were looking on while all this was happening before their very eyes.

Shops were looted… but the police did nothing… specific instructions had been given to the police that they should not shoot, should not arrest, should not deal with the lawlessness and disorder that was let loose… rowdies and hooligans were given a free hand to assault, humiliate and rob any innocent Tamil walking the roads on that day.

That was the attitude taken up by a Cabinet composed of Sinhalese Ministers…These (hooligans) were instigated by some members of Parliament… they were heading the gang of hooligans. The Prime Minister made a remarkably wonderful speech on that occasion. He came, he smiled and he told the crowd, “Don’t do that. Rain is coming down. They will be cooled in no time.” That was the type of appeal he made. If Sinhalese men were being thrashed by Tamils and their ears bitten, I wonder whether the Prime Minister would have adopted the same attitude.”

“Some Tamil Satyagrahis were thrown into Beira Lake, near the Parliament House,” wrote Satchi Ponnambalam, another leading Tamil lawyer and judge, in The National Question and the Tamil Liberation Struggle.

“From that moment, every Tamil seen on the roads of Colombo was attacked. Tamil office employees going home from work in public transport were caught and manhandled. Tamils lead to stay indoors for personal safety, for days on end. Sinhalese hooligans took charge of the situation and went on a rampage of arson and looting of Tamil shops and homes. The rioting and violence were instigated by the government and actively supported by the Sinhalese organisations and Bhikkhus to frighten the Tamils into accepting the “Sinhala only” act.”

“The satyahgrahis were beaten and pelted with stones; at least one Tamil was thrown into the nearby Biera Lake, and another had an ear “bitten and torn off”,” wrote Neil DeVotta in Blowback: Linguistic Nationalism, Institutional Decay, and Ethnic Conflict in Sri Lanka.

“Some Tamils were hospitalized, and among those wounded were members of parliament. The police, in the main, stood by as passive observers, having been given explicit orders not to intervene unless they themselves were attacked.”

Amongst those that led the attack on the peaceful Tamil protestors was then a junior Sri Lankan minister K. M. P. Rajaratne, added DeVotta. Following a career in Sri Lankan politics he died in 2011, having never been held accountable for the attack.

The attack on the Tamils on Galle Face Green and subsequent violence in Colombo which saw further attacks and looting on Tamils throughout the city, sparked a wave of state-backed Sinhala mob attacks across the island.

“While the Sinhala-only bill continued to be debated over the next few days, the riots spread to many parts of the country, and the parliamentary debate was interrupted on a number of occasions when Tamil members read out telegrams from various outposts in the Eastern Province, where Tamils were being assaulted and murdered,” DeVotta continues.

A demonstration in Batticaloa, attended by 10,000 Tamils was fired upon by the Sri Lankan police. At least two Tamils were killed in the shooting, with then Sri Lankan president S. W. R. D. Bandaranaike subsequently banning another large Federal Party march planned in the city.

Violence also flared in Trincomalee, but “the worst violence occurred in Gal Oya, an area of heavily Tamil Eastern Province which had been colonized by Sinhalese settlers,” wrote James Manor in The Expedient Utopian: Bandaranaike and Ceylon. Tamils in the region were murdered by Sinhala mobs on the night of 11 June, 1956.

“Sinhalese toughs – inspired as always by fantastic rumours – seized government cars, bulldozers and high explosives and for a few days terrorized the Tamil minority in the colony. Scores of Tamils, certainly well over on hundred, were massacred and hundreds more were driven into hiding.”

“The press and the government both severely understated the death toll and the extent of the campaign of terror.”

“The worst violence ensued in Gal Oya, a Sinhalese colonization settlement in the Eastern Province, where transplanted Sinhalese hoodlums took possession of government vehicles and explosives and terrorized and killed dozens of Tamils,” added DeVotta. “The government underreported the violence in Gal Oya, which perhaps helped prevent further violence. However, word soon got out regarding what had actually transpired in Gal Oya and caused the thunderstricken Tamils to seriously question what their future was going to be in a Sinhala-only Ceylon”

“In Batticaloa and the Gal Oya valley there was such violence that between 20 and 200 persons were killed, depending on which side was doing the tallying,” wrote former US Ambassador to Sri Lanka, William Howard Wriggins in Ceylon: Dilemmas Of A New Nation.

Stanley Jeyaraja Tambiah, a celebrated Tamil anthropologist, was a twenty-seven-year-old social scientist in Gal Oya when the violence took place and recorded events he had pieced together in a memorandum.

“Violence broke out on a scale hitherto unknown,” he wrote in Buddhism Betrayed?: Religion, Politics, and Violence in Sri Lanka. He went on to note that it “set the precedent for even more destructive violence two years later.”

Two years later in 1958, Sinhala mobs once more began to attack, rape and murder Tamils across the island, in what was to become another in a series of deadly anti-Tamil pogroms.