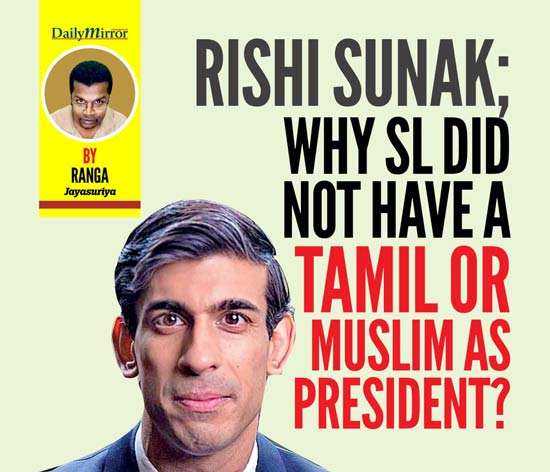 Britain now has a British Asian, Hindu Prime Minister, though Rishi Sunak is whiter than White in his policies and richer than the British Royalty. That would make, at least those who see beyond the colour of the skin, question whether the new Prime minister is a representation of the average British Asian life.

The rise of Rishi Sunak to the helm of the Conservative Party – he dodged a membership vote thanks to Penny Mordaunt’s last-minute withdrawal from the race, which could otherwise have produced quite a different result – has made many ponder as to why Sri Lanka cannot have a Tamil or Muslim prime minister or a president.
Many commentators have blamed the perceived ethno-nationalistic nature of the Sri Lankan state, a yet another perceived act of discrimination at the hand of the state. Though, not being able to get elected as the head of the state through a majority vote is not necessarily a grievance. At best it is an aspiration. Unfulfilled.
But, why didn’t Sri Lanka have an ethnic minority member as the head of the state or the head of the government?
Probably, the issue is not with the structure – or the state, but with the strategy.

One might start looking at how those who succeeded in breaking this glass ceiling did it elsewhere. Rishi Sunak did not contest from the ‘British Indian Party’, but under the Tories. Barak Obama did not run under the Black Panthers, but from the Democratic Party, the mainstream political parties in a duopoly of political systems, that focused on national issues, much less on particular ethnic or religious aspirations.

In contrast, the minority political leaders in Sri Lanka have historically found it more electorally convenient to form race-based political parties. That it was a reaction to the perceived ethno-nationalism of the Sinhalese is the standard argument, with the 1956 electoral victory of SWRD Bandaranaike and subsequent Sinhala-only Act, being described as the watershed events in majoritarian politics.

However, progenitors of ethnic Tamil Nationalist politics, All Ceylon Tamil Congress (ACTC) – founded in 1944, and Illangai Tamil Arasu Kachchi (Federal Party) in 1949, were in politics long before Bandaranaike defected from the UNP and formed the SLFP in 1951. GG Ponnambalam, the ACTC leader, campaigned for guarantees of 50-50 representation for minorities under the Soulbury Constitution. The ACTC then joined DS Senanayake’s UNP-led government, but his detractors within ACTC, led by SJV Chelvanayagam detested the collaboration with the Sinhalese political parties and parted ways to form the Federal Party in 1949.

Ethnic Tamil politics in the early stage was not a reaction to Sinhala Buddhist majoritarianism, as it is often alleged, it is in-built into the Dravidian social-political exceptionalism, they adopted as the governing ideology. That effectively set off a race to the bottom as the competitors for the Tamil vote schemed to present themselves as more nationalistic than the other, until three decades down the line, the LTTE prevailed as the sole representatives of the Tamils.

Also, the ethnic minority politics at that stage was a reaction to the demographic reality as the minority elites feared being submerged by a numerically large Sinhalese Buddhist majority in the newly independent state. The state building also entailed the rearrangement of the state for all its people to benefit from it, which itself had its toll over time, especially on the disproportionate representation of Northern Tamils in various aspects of the state, ranging from bureaucracy to standardization of the university admission. Though the latter has been cited as ethnically motivated, Sri Lanka is not the only country to opt for affirmative action to provide more equitable opportunities in education.

The British tradition of divide and rule might also have its effect. A small group of elites who thrived in that system, rather than assimilating to the new state, thought to perpetuate the old model by other means. Thus their unfilled aspirations were masqueraded as grievances and the indifference of the majority Sinhala-dominated parties to these demands hardened their struggle, finally leading to the Vattukkottai resolution, a separatist campaign and finally the LTTE terrorism. None of that makes you a palatable candidate for the majority if you stand for the dissection of the state.

That is not to say, minorities have not succeeded in politics. From Sirimavo Bandaranaike’s influential education minister Badiuddin Mahmood to a host of UNP stalwarts, ranging from ACS Hameed, and Bakeer Marker to MH Mohammed were influential within their parties and in national politics. Colombo Municipal Council has had more ethnic minority mayors, long before Sadiq Khan became the London Mayor in 2016.

Also, it is disingenuous to dismiss the two main political parties, especially the UNP or the SJB, as ethno-majoritarian, though any political party worth its salt should be mindful of the demographic reality of its electorate. Until the breakup of the UNP, Kabir Hashim, a Muslim was the General secretary of the UNP.

Then there is another problem. Ethnic minority members who managed to rise above the ethnic lines and were adopted by the Sinhalese mainstream have often been discredited and delegitimized by some of the most articulate quarters of minorities, the type of people foreign embassy staff consult to have a grasp of Sri Lankan politics.

Consider Lakshman Kadirgamar or even Muttiah Muralitharan – or now Ali Sabri, the latter, though one could detest his political party of choice – Pohottuwa – is a true Sri Lankan patriot than most Sri Lankans. The problem with the ethnic minority political project is that Sri Lankan patriotism is made subordinate to ethnic allegiance.
There is an interesting element in the British Asian upstaters of the Conservative Party. Rishi Sunak, Suella Braverman and Priti Patel are more anti-immigrant Brexiters and devotees of British colonial legacy than average White British. That might be a political survival instinct or an engrained trait of the colonial experience, where some ethnic minorities in the British Colonies were more than happy to play the second fiddle to the White Europeans, as long as they are above the majority. This illustrious list includes young Mohandas Gandhi in South Africa, who in a series of letters to the colonial administration ranted at the ‘mixing of Indians with native savages.’
Recently, Aragalaya offered an example of non-racial political activism. A few, except an extreme bigot, cared about the race or religion of Aragalaya activists, indeed, much less than their long hair and uncut beards. Many of the prominent and vocal members in Aragalaya were Muslims and Tamils and were accepted as leaders for their commitment to the cause, much less for their race.

That non-racial inclusivity and activism could be the model if Sri Lanka is to have a minority prime minister or a president.