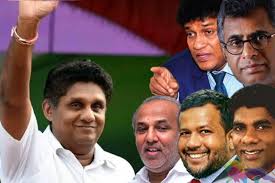 This infighting was made obvious by Opposition Leader Sajith Premadasa when he made a controversial statement in Hambanthota last week, asking those who could not work with him to leave the party.

“In this party, I am the leader and no one will be able to hold me back as in the past. Those who cannot work with me can leave the party,” Premadasa said addressing a gathering in the Hambanthota district.

Many believe his remarks were aimed at Patali Champika Ranawaka who recently launched the ’43rd Brigade’ as a civil society movement to project himself as an alternative leader. When contacted by several journalists, Ranawaka has refused to comment on Premadasa’s statement.

Several close allies of Ranawaka who are strongly involved with the “43rd Brigade” have been sidelined within the Samagi Jana Balawegaya.