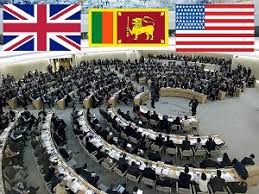 The United Nations (UN) Core Group of Countries on Sri Lanka will present the amended draft of the resolution on Sri Lanka to the UN Human Rights Council (UNHRC) tomorrow (8) for an informal dialogue, after which the draft will be studied before expressing objections, Foreign Secretary Prof. Jayanath Colombage said.

He told The Sunday Morning that they have not yet been informed of the date the vote will be taken up.

“On 8 March, the Core Group will present its resolution once again for an informal dialogue. We think the vote will most probably be on 20 or 21 March. We are making preparations accordingly, and once this resolution is presented on 8 March to be read again, we will read it and express our objection,” he said.

Commenting on the support of UNHRC Member States during a vote, the Foreign Secretary said that while Sri Lanka received support in connection with the speech of the UN High Commissioner for Human Rights, the vote, however, was different.

He said that powerful countries make threats and make voting members fear them, adding that they promise funds and loans in order to get them not to support Sri Lanka.

“They also assure that they won’t look into the human rights records of the voting countries. They make threats like that. Therefore, the UNHRC is completely a pro-western entity which was clearly evident during the first day, as 21 countries spoke in support of us but not a single western country was there. All 15 countries except for the Solomon Islands that spoke against us are western countries. The Solomon Islands is also an old colony of the US,” he claimed.

Meanwhile, highly placed sources claimed that Sri Lanka has decided to go for a vote despite a request made by the Core Group led by the UK for a last-minute consensual resolution.

They said the Government knows that Sri Lanka will be defeated, yet is still going for a vote.

“Sri Lanka has 10 votes in the Council, but it is likely to increase to 15 with the resolution of the Covid-19 burial issue. India, Japan, and Australia are likely to abstain from voting and around 29 countries are likely to vote in support of the resolution,” they further claimed.

The amended draft resolution that was made public by some media has inserted a new point between the second and third points to comment on the joint statement issued on 26 May 2009 by then President Mahinda Rajapaksa and UN Secretary General Ban Ki-moon to seek a political settlement and to bring about lasting peace and development in Sri Lanka.

Another amended point has highlighted the responsibility of states to comply with their relevant obligations to prosecute those responsible for gross violations of human rights law and serious violations of IHL.

The draft resolution has stressed the importance of a comprehensive accountability process for all violations and abuses of human rights committed in Sri Lanka by all parties, including those by the Liberation Tigers of Tamil Eelam (LTTE). The term “by all parties” has been added anew here.

Increased marginalisation of Tamil and Muslim minorities, restrictions on media freedom, and restrictions on the public memorialisation of victims of war, including the destruction of a memorial, have been added in the new draft as areas of serious concern.

It has requested Sri Lanka to review the Prevention of Terrorism Act (PTA) and to ensure that any legislation on combating terrorism complies fully with the State’s international human rights and humanitarian law obligations. The word “fully” has been added anew.