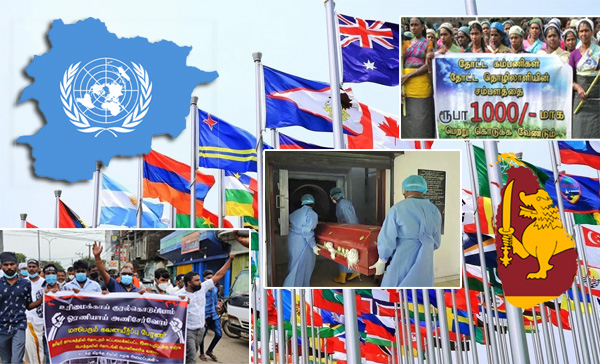 The Government of Sri Lanka (GoSL) responded to the annual report of UN High Commissioner for Human Rights Michelle Bachelet and rejected the proposal to advance accountability options at the international level in relation to Sri Lanka.

On Monday, the Advance Edited Version of the comments made by the Permanent Mission of Sri Lanka in Geneva on the OHCHR report was released.

In its observations, the GoSL said it was unfortunate that the OHCHR has decided to omit the majority of the information provided by the GoSL in writing as well as at the meeting between GoSL officials and the OHCHR ahead of the preparation of the report.

“The Office however appears to have taken a wealth of misinformation to produce a report that puts its credibility and integrity at risk. Moreover, the OHCHR reports have been highly selective, preconceived, politicized and prejudicial in levelling allegations against the GoSL in terms of the six selected ‘trends’, calling them as ‘early warning indicators that require the Human Right Council’s urgent attention,” the report by Sri Lanka said.

It defended the decision taken by Sri Lanka to appoint former military officials to the posts in the government and commented on the crimes committed by the LTTE, the PTA, communal violence in the aftermath of the Easter attacks, covid-19 cremation issue as well as the imprisonment of lawyer Hejaaz Hizbullah.

Sri Lanka further said it regretted that that OHCHR has submitted itself to the preconceived, politicized and prejudicial agenda which certain elements have relentlessly pursued to trigger such disproportionate and unwarranted measures against Sri Lanka, and cautions that any options at the international level would tantamount to an unwarranted interference in the internal affairs of a sovereign State in contravention of the UN Charter.

“The GoSL reminds that calling for targeted sanctions and travel bans against individuals, in the absence of credible findings by a competent court/body on violations committed them, itself constitutes nothing less than a political agenda against a sovereign nation, aimed at destabilizing and a violation of their rights and contravention of the principles of natural justice.

“It is maintained that the Government is able, willing and committed to pursuing meaningful mechanisms of accountability and reconciliation, in accordance with its constitutional framework.

“It is regretted that references to investigations targeted sanctions, assets freezes and travel bans against state officials and other actors, based on ‘credibly alleged’ is unfounded, unsubstantiated and totally misconceived.

“It is important to point out that the tone and substance of the report, going far beyond the legitimate scope of OHCHR, seek to establish a dangerous precedent which has grave repercussions for all sovereign States.

“The call for asset freezes, travel bans and the reference to the ICC and the exercise of universal jurisdiction by individual States, without a semblance of evidence in support, particularly in relation to a country like Sri Lanka which has consistently being compliant and engaged with the United Nation and its mechanisms, points to a distinct and eminent danger which the international community as a whole need to take note of.

“As a responsible member of the United Nations, Sri Lanka has remained open and committed to constructively engage with the UN system including the Human Rights Council on national as well as global matters of importance.

“Sri Lanka’s commitment in this regard has been amply demonstrated by, among others, its accession and implementation of all 9 core human rights conventions, the unprecedented number of special procedure mandate holders of the HRC and treaty bodies that it has received (10) particularly in recent years, and the constructive engagement that Sri Lanka has had with UN treaty bodies.

“We look forward to continuing our engagement with the OHCHR, UN Human Rights mechanisms and procedures, and to continue to work in close cooperation with the international community through capacity building and technical assistance in mutually agreed areas, in keeping with domestic priorities and policies.”