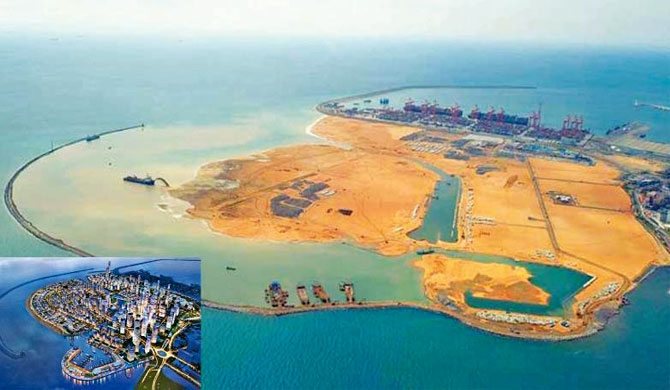 SJB MP Nalin Bandara told reporters today that Speaker Mahinda Yapa Abeywardena is due to announce the decision of the Supreme Court regarding the bill tomorrow in parliament, after which the bill will be debated by MPs tomorrow and the day after.

“The government should’ve given more time to the opposition to study the bill after announcing the Supreme Court decision,” said Bandara, calling for a three-day debate minimum.

“This is a serious situation. This is a bill that will decide Sri Lanka’s sovereignty. If even a word is misplaced in this bill it will threaten the sovereignty of the country,” he said.

The SJB believes the Port City is a good project that needs to happen, said Bandara, but the economic commission bill in its current form will have long term repercussions in terms of Sri Lanka’s dignity as an independent nation and its non-aligned foreign policy.

The SJB, the Bar Association of Sri Lanka (BASL), members of the clergy and others have vehemently opposed the bill. SJB lawyers said on April 17 the bill has given the proposed commission too much discretion and has denied equal opportunity to Sri Lankans who did not have black money stashed abroad.

The possibility of non-nationals being appointed to the Commission could end up with the fate of the people in the area being decided by foreigners, SJB lawyers said.

The BASL meanwhile said the law may affect the unitary state, sovereignty of the people, fundamental rights and powers of the parliament, the BASL’s executive committee said.

Eighteen petitions have been filed in Sri Lanka’s Supreme Court against the bill. The court concluded the consideration of petitions filed challenging the Colombo Port City Economic Commission Bill on April 23 and announced that the determination will be directed to the Speaker of Parliament.

Bandara further said the government’s pro-China policy will be a “huge disaster” for Sri Lanka in the long run.

Last week it was decided at the Committee on Parliamentary Business chaired by Speaker Abeywardena to hold next week’s parliament sittings only on May 04 and May 05, a statement from parliament said.

It has been decided to debate the Colombo Port City Economic Commission Bill on May 05 from 10.00 am to 8.00 pm taking the entire day without adjournment for lunch.

An adjournment debate on the current situation in the country in the face of COVID-19 will be held tomorrow from 11.00 am to 5.30 pm.