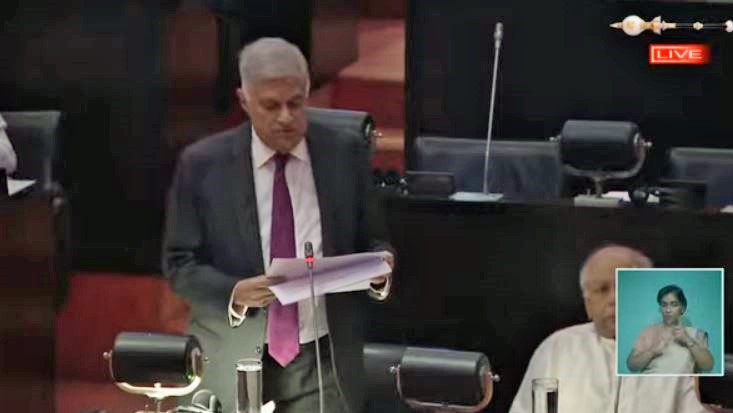 Sri Lanka President Ranil Wickremesinghe has reiterated his call for immediate bipartisan consensus on a permanent solution to the island nation’s decades-long ethnic problem, inviting opposition lawmakers for a round of talks after December 11.

Speaking in parliament on Wednesday November 23, Wickremesinghe once again invited all parties representing the parliament to discuss a lasting solution to the grievances of the country’s Tamil minority, most of whom reside in the formerly war-ravaged northern and eastern provinces of the island.

“There is nothing new to talk about. [We just have to] decide what is relevant. I think we can do it by next year. My aim is to do it by the 75th anniversary of independence. If you can’t do that, you may not have that [sp] Sri Lanka by 2048,” said Wickremesinghe.

Wickremesinghe had previously invited all Tamil political parties to a discussion on issues faced by the Tamil community with a view to resolving them with no foreign intervention by February 04 next year when Sri Lanka celebrates 75 years of independence from the British.

On November 10, Wickremesinghe asked parties that represent the Tamil community in parliament help “resolve these issues amicably without outside interference”.

The privately owned The Sunday Times reported on November 06 that a ministerial team was to be appointed to draw up the “broad outlines of what such a project should encompass”. This would later form the basis of discussions with all stakeholders, the English weekly reported.

Speaking in parliament on Wednesday, Wickremeisnghe asked Tamil National Alliance (TNA) legislator M A Sumanthiran if he is willing to come on board. He posed the same question to chief opposition whip and main opposition Samagi Jana Balavegaya (SJB) MP Lakshman Kiriella and MP Mano Gansean whose Democratic People’s Front (DPF) is part of an SJB-led alliance.

SJB and opposition leader Sajith Premadasa was absent at the time, and a party member was heard saying “We’ll ask our leader and get back to you”.

Kiriella responded that Wickremesinghe knew very well that Kirella had long supported devolution of power. The real question, he said, was whether Wickremesinghe’s new backers in the ruling Sri Lanka Podujana Peramuna (SLPP) would ever support meaningful devolution.

“We know what the SLPP really feels in their heart of hearts. They are opposed to devolution,” said Kiriella, challenging SLPP leader and former President Mahinda Rajapaksa to state his position on record.

Kiriella said it was the Kandyan Sinhalese who had first proposed devolution in the 1930s. One of the Kandyan leaders at the time, he said, was an ancestor of the incumbent president.

Said Wickremesinghe: “Will you ask your leader and tell us this evening, then?”

MP Ganesan said: “The SJB alliance is agreeable to devolution of power. That is why we’re here. We wouldn’t be, otherwise.”

Responding to Wickremesinghe, MP Sumanthiran said: “If you call for a meeting of all parties as soon as we conclude the budget session, we can finish it before December 31.”

Wickremesinghe agreed and said a meeting will be called in the week following December 11.

Kiriella, however, noted that when ousted former President Gotabaya Rajapakasa had invited the SJB for talks on a proposed new constitution, he had sent a missive to the party that they shouldn’t join if they wished to protect the 13th amendment to the constitution.

President Wickremesinghe assured Kirella that he would in fact protect the 13th amendment, which came in the wake of the 1987 Indo-Lanka Accord and saw the creation of the provincial councils.

“You’re one person. Are the others here in agreement? Are the MPs? We know very well about the honourable president. He was our leader for 20 years,” said Kiriella.

In a lighter vein, he quipped: “The prime minister said this morning that he’s also an American now. Maybe it’s the influence of the president. We applaud that.”

SLPP MP Gevindu Kumaratunga who now sits in the opposition cautioned that they can only support a proposal that will honour Sri Lanka’s unitary character.

“If you’re asking for a consensus within a unitary Sri Lanka, we’ll agree. Outside of that, I don’t think a majority of people will agree. There is a ground reality here. Our soldiers laid down their lives to protect the unitary state,” said Kumaratunga.

President Wickremesinghe pressed on, asking the House at large to agree to a meeting to discuss proposals.

The president also said that Muslim youth who were arrested in connection with the 2019 Easter bombings against whom there is no evidence will also be released soon as discussed at the latest security council meeting.