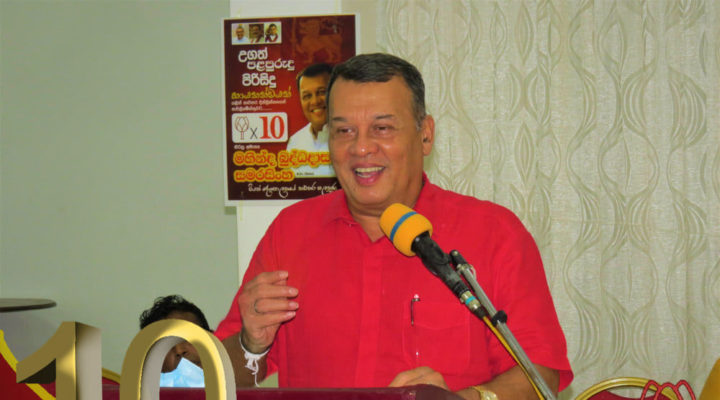 Elected ruling Sri Lanka Podujana Peramuna (SLPP) parliamentarian Mahinda Samarasinghe on Tuesday (23) said he will take up the ambassador post in the United States with effect from next week.

“President Gotabaya Rajapaksa requested me to accept the ambassador post to the US. I accepted,” Samarasinghe told parliament.

“I expect to resign from parliament in two or three days and fly to the US on Friday (29), against a backdrop of the US becoming a member of the United Nations Human Rights Council (UNHRC) with a huge vote margin victory. The US starts its membership on January 1.”

Samarasinghe’s decision to take up the diplomatic posting comes as Sri Lanka under President Rajapaksa is trying to balance a foreign policy that is seen as China friendly. Western nations including the US have been pushing the Rajapaksa government to address alleged past human rights violations though the UNHRC.

The rights body has adopted a tough stance on Sri Lanka over its past rights abuses. Samarasinghe said his appointment was to strengthen Sri Lanka’s relations with the US amid the challenging allegations and the UNHRC’s calls for a probe

The UN General Assembly last month elected the US to the Geneva-based UNHRC, more than three years after the Trump administration quit the 47-member body over what it called chronic bias against Israel and a lack of reform.

“I can tell from the 10-year experience of dealing with the UNHRC, when the US becomes the member, the US will be taking a leadership role. So I see that it as an essential to develop good relations and mutual understanding with the US,” said Samarasinghe.

“President Rajapaksa is also of the view that it is not only on economic grounds but also politically that we must form a strong relationship with the US. I am going to fulfill this objective.

“I am not leaving politics. I am going at the request of the president. I want to remind you that I will be giving political leadership to the people of the Kalutara district upon my return after serving the motherland,” he said, referring to his electorate.

Samarasinghe was elected from the island nation’s Western coastal district of Kalutara in the 2020 parliamentary poll. He polled the least preferential votes out of the eight SLPP representatives elected to parliament.

Samarasinghe was on a three month leave from parliament this year that was approved by the legislature.

Before joining politics, he was a politically-appointed official in the foreign service and served as the first secretary to the Sri Lanka High Commission in Australia as well as a counselor for the Sri Lankan Permanent Mission to the United Nations in Geneva in the 1980s.

Samarasinghe entered active politics in 1988 and was elected to parliament in 1994 on a center-right United National Party (UNP) ticket. He crossed over to the then government side in 2006, joining the ranks of the center-left Sri Lanka Freedom Party (SLFP).

He has served as Minister of Labour, Disaster Management, Plantation, Skills Development, as well as Ports and Shipping in his parliamentary career. He, as Ports Minister, signed the Chinese-built 1.5 billion US dollar Hambantota port deal to be handed over to China in 2018 on a 99-year lease.

Samarasinghe is the third SLPP legislator to resign from parliament since July.

He defected from the Rajapaksa camp after the 2015 presidential poll defeat and joined former president Maithripala Sirisena. He lost the parliamentary election later in 2015, but Sirisena appointed him on the national list.

Samarasinghe’s name was in Wikileaks quoted by then US ambassador to Colombo Robert Blake in 2007.

The cable said Samarasinghe had expressed concern that then President Mahinda Rajapaksa and his two brothers – Basil and Gotabaya- had rendered his human rights and humanitarian access efforts ineffective and that he would not sacrifice his political career to become “part of a white wash” for the Sri Lankan government’s then alleged recent human rights violations.