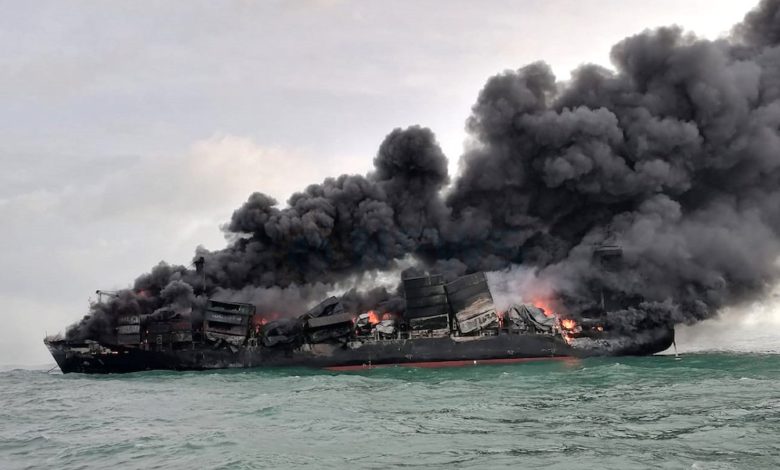 Sri Lanka should modernize the shipping policy framework to take the country forward considering the needs of all stakeholders and review the role of shipping agents, the top body representing the country’s importers and exporters said in the wake of the latest shipping disaster.

“The government should take appropriate action to involve experts in the industry and main industry bodies in developing such policy soon and successive governments should continue to endorse the policy if we are to succeed in our commercial maritime activities,” Sri Lanka Shipper’s Council representing the country’s exporters and importers said.

The X-Press Pearl caught fire sometime after an acid leak was found in a container, the fire went out of control in heavy winds despite foreign tug boats being called to help by the owners.

“If Sri Lanka is to reach its aspiration to become the maritime hub of South Asia using its unique strategic location, the maritime industry needs to upgrade its salvage and other connected services required to support distressed ships that pass by the Island on a daily basis,” the Shippers Council said.

“If not, we become less attractive to the international shipping networks in terms of developing Colombo as a hub port. Sri Lanka should be better prepared to handle such disasters, the body said.

“Of course, the cost of upgrading infrastructure and increasing maintenance cost will drive operational cost escalation but a mechanism should be in place where the importer and exporter will not have to bear these increases finally,

Sri Lanka does not have tug companies, salvors or international shipping companies based in the country and attempts to liberalize the shipping business have been resisted by agents for decades.

“The role of ship agents in Sri Lanka should also be reviewed,” SLSC said.

“Considering they are representing international shipping lines in the country and compensated for handling containers including transshipment, have they taken adequate proactive measures including investments made to ensure the safety of their principles’ ships and the cargo they carry as imports and exports to and from the Island?

“In a nutshell, most of these items could be well addressed and rectified if a robust longer-term Shipping and logistics Policy is implemented in the Island,” the grouping said.

“SLSC has been in the forefront providing valuable input to several drafts of such policy document but unfortunately Sri Lanka has failed to come up with a fair and comprehensive document to address this requirement owing to some quarters in the industry using such opportunity to further personal business gains over national interests.”

Some of the resolutions ratified internationally is not adequately passed in Sri Lankan legislation which may be a hindrance to suitably argue these cases in the Island should the need arise, the SLSC warned.

X-Press Pearl did not give advanced warning of the leak, but sought help after anchoring in the outer harbhour, port officials have said.

The ship was carrying 25 tonnes of nitric acid and over 800 tonnes of sodium hydroxide, both class 08 dangerous goods which require special storage.

SLSC called for an ‘Advance Manifest Submission’ system for all cargo arriving to Colombo port including for transshipment before the ship sails from the origin port.

SLSC said such procedures were followed in developed nations.

“Currently, this requirement is closer to the vessel arrival in Sri Lanka and do not provide adequate time to risk assess the incoming goods or vessels to be better prepared for eventualities such as this. It is now more than a requirement an obligation.”

“The International Maritime Organization’s IMDG Code has clear guidelines to handle these types of cargo and incidents,” SLSC said.

“However, the resolutions and international laws ratified need to be locally included appropriately in country legislation for it to be considered as the law of the land.

The SLSC has called for a transparent investigation in to the incident without political interference.