The five suspects were brought into the court amid heavy security and the security in the city has been beefed up as well.

The two students, 23 year old Nadarasa Gajen and 24 year old Vijayakumar Sulakshan were killed in the wee hours of 21 October when the police shot at them while they were traveling on a motorcycle in Kankasanthurai.

The police claimed that they fired in the air when the two students were riding in the night disregarding traffic signals and the police were alerted on motorcycle gangs roaming in the city at night.

The Five policemen attached to the Jaffna Police were arrested in connection with the incident and remanded until 4th November.

The Magistrate delivering the judgment of the inquest into the deaths, has said that Sulakshan died of gunshot injuries and the pillion rider, Nadarajah Gajen died of injuries from the collision after the gunshots injured the rider.

The lawyers appearing for the students informed the court that they have important evidence, including the CCTV camera footage and statements from eye witnesses.

The Magistrate instructed the lawyers to provide all necessary information to the Criminal Investigations Division (CID), for their investigation.

He also ordered the police to produce eye witnesses and special evidence, if any, in the court when the suspects are produced in court again on Nov 18. 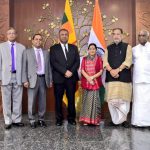