The Rajapaksas, the SLPP and the unfolding Indo-Pacific Great Game

The current political impasse in Sri Lanka marks an important opportunity for Mahinda and Gotabaya Rajapaksa to think about the consequences of their current actions for future support from the United States and others for a government a Rajapaksa could be elected to lead next year. Despite two no-confidence motions against Prime Minister Rajapaksa’s Government and two motions to halt funding for government ministries, Mr. Rajapaksa has refused to step down.

His refusal not only calls into question his and the Sri Lanka Podujana Peramuna’s (SLPP’s) adherence to Sri Lanka’s Constitution, it begs the question why they are inflicting unnecessary wounds on their and the SLPP’s future.
The strong showing of Rajapaksa and the SLPP in local council elections earlier this year demonstrated the support Rajapaksa continues to enjoy in Sri Lanka. New presidential elections could be called early next year. Although Mahinda Rajapaksa is prohibited by the Constitution from running again for presidency, his brother Gotabaya could be a strong contender.

“A new MCC programme for Sri Lanka is now under consideration”

The Rajapaksas enjoyed famously good relations with China during Mahinda’s presidency.  China financed the port of Hambantota and several other mega projects. The Hambantota port project has since become a cautionary tale for all recipients of China’s Belt and Road Initiative (BRI) largesse. When Sri Lanka could not service its debt payments, China instead negotiated equity control of the port for itself.
Since then, newly-elected governments in the Maldives, Pakistan and Malaysia all have announced reviews of BRI projects in their countries to be sure these projects benefit their countries and will generate good rates of return that would enable them to service their debt to China.
Indeed, as Xi Jinping doubles down on BRI and continues projects that will give Beijing the capacity to exert control over international waters in the South China Sea, countries across Asia increasingly want to maintain good relations with the United States, Japan, India and others to counter-balance China’s growing economic and military influence.

The United States, and other members of the Quad – India, Japan and Australia – have responded by enunciating a broad Indo-Pacific strategy to ensure a free, open and prosperous Indo-Pacific.  The US also passed the Better Utilization of Investments Leading to Development (BUILD) Act earlier this year, creating a new International Development Finance Corporation (IDFC) to incentivize US corporations and institutional investors to invest in developing countries and provide an alternative financing mechanism to China’s BRI. The IDFC complements new US Millennium Challenge Corporation (MCC) projects in countries that meet a host of good governance criteria. A new MCC programme for Sri Lanka is now under consideration. Japan and others have developed their own international infrastructure and Indo-Pacific initiatives.

Sri Lanka — with its strategic location on the busiest sea lanes in the Indian Ocean, its literate population and the tentative steps it had taken to achieve reconciliation after its bloody war with the Liberation Tigers of Tamil Eelam (LTTE) — had been well-positioned to benefit from these new Indo-Pacific initiatives.
But President Sirisena’s and Prime Minister Rajapaksa’s recent actions have raised serious questions in Washington, New Delhi, Tokyo and elsewhere, about their commitment to democracy and good governance. The results of the recent mid-term elections in the United States will bring added scrutiny on Sri Lanka. The Democratic Party won back control of the House of Representatives and announced that promotion of human rights and democracy would be a priority. So Sri Lanka should expect more intensive congressional review of its recent actions, which could impact Sri Lanka’s access to financing from the new IDFC or the MCC.
The above analysis suggests that Mr. Rajapaksa would be wise to step down as Prime Minister, and instead put his considerable political skills toward helping the SLPP win next year’s presidential elections through a free and fair contest. This would resolve the current political impasse and position Sri Lanka to be a leader and winner as the new Indo-Pacific great game unfolds.

Ambassador Robert Blake served as US Ambassador to Sri Lanka from 2006 to 2009 and then as Assistant Secretary of State for South and Central Asia from 2009 to 2013.  He retired from the US Government in 2016 and now advises US business overseas on behalf of  McLarty Associates. 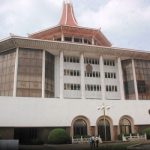