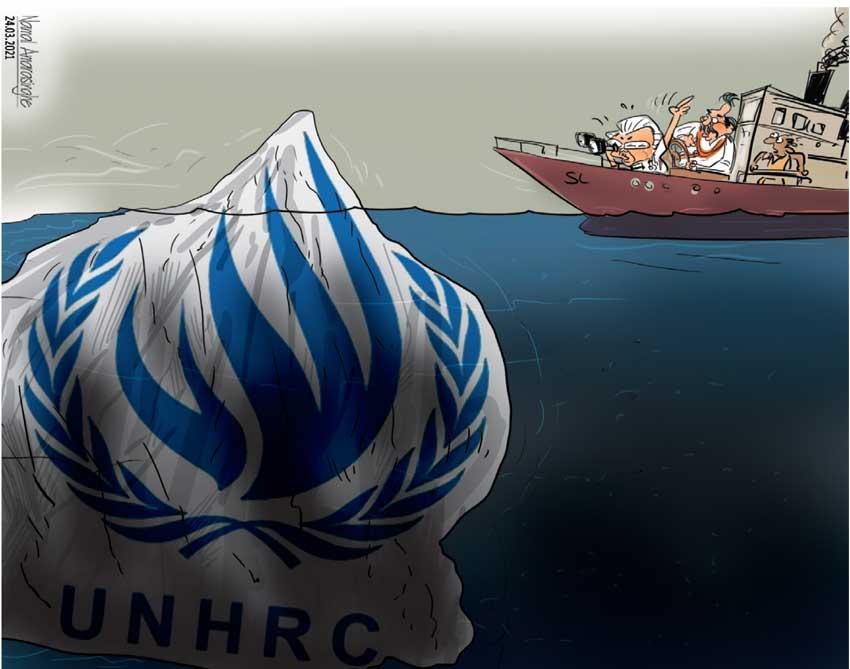 The TV news of 5 April showed veteran Government politician S.B. Dissanayake reassuringly informing the Chief Prelate of the Getambe Raja Maha Viharaya that President GR has been told by China’s President Xi that Sri Lanka can “take as much money as you like and repay it whenever you can”.

The Belt-and-Road Initiative (BRI) is a great thing, and the Port City is part of the BRI, but Sri Lanka must not hang itself with that belt.

Emeritus Prof. Mick Moore, a distinguished economist who is probably the leading overseas authority on the history of Sri Lanka’s development policy (whom I recall warmly from three decades back), gave an admonitory masterclass on the Port City in these pages this week. Quite unlike him, I cannot comment with any degree of knowledge, let alone expertise, on the subject, but I do know what has happened in other countries, when there have been times and geographic spaces where important laws didn’t apply.

The Godfather Part 2 takes us to pre-revolutionary Havana and the tax havens for gambling. One can also imagine what Pablo Escobar, El Chapo and the cartels would have done with an offshore sanctuary. They’d have sold their stuff, come in and out on speedboats, laundered the money, and used part of it as slush funds to influence the Police, the military and politicians, even spending for their favourite enablers at presidential elections.

Having watched Stephen Soderbergh’s fact-based movie on The Panama Papers, The Laundromat with Meryl Streep and Antonio Banderas, one knows what an artificially-constructed version of a Cayman island can serve as.

The DeutcheWelle interview that the Ministry of Foreign Affairs Secretary Admiral Jayanth Colombage gave Tim Sebastian was an exhibition match of own goals. You do not use terms like “white countries” unless you wish to sound as if you represent a Mugabe-type administration.

Tim Sebastian’s relentless questioning about the Presidential pardon for the child-killer Sergeant, culminated with the devastating moral blow: “How low can your country sink?”

The direction that the Gotabaya administration is headed is hardly shrouded in secrecy. It is good for a country to have friends in high places, and a positive sign that President Xi has invited President GR to China. It is no bad thing that “Sri Lanka and China have elevated their bilateral relations to the level of strategic partnership cooperation” as reported by the Daily Mirror’s Kelum Bandara. China’s strategic partnerships are a category (with many variants and sub-categories) that usually entails a military component as well.

The problem arises when a leader has “strategic partnership cooperation” with China, having preceded or accompanied it with a speech accusing unnamed other countries of entertaining geopolitical ambitions in the Indian Ocean region which they attempt to fulfil by encouraging “separatism in the guise of the devolution of power”.

There appears to be a Beijing-Islamabad-Colombo triangle in the making in South Asia, to project China’s influence and countervail/contain India.

In February 2015 and April 2015, a robust domestic accountability mechanism was designed in two drafts by the Attorney-General’s Department and presented at the inter-agency process coordinated by the Foreign Ministry. Though agreed to by that inter-agency Committee, the MFA coordinator refused to permit the Committee members, including Dr. Rohan Perera, formerly the Senior Legal Advisor of the MFA and LLRC member, to sign-off on it. She abruptly terminated the inter-agency process.

In its place, the UNP Prime Minister (according to the ex-Foreign Minister’s recent revelations) authored a resolution which included foreign judges, counsel, prosecutors et. al., in a throwback to the colonial model so poignantly depicted in Leonard Woolf’s Village in the Jungle (“Baddegama”). It triggered an anti-cosmopolitan majoritarian backlash which helped electorally eliminate those who proposed it, and eroded the democratic civic space that had broadened in 2015.

Though the March 2021 UNHRC Resolution posits judicial processes in other countries, those will take place by definition, over-the-horizon, and the domestic blowback will be qualitatively less than would have taken place had there been foreign judges on Sri Lanka’s soil, deliberating on a war we won, not lost. One’s imagination should extend to an army of much younger Silindus (Silindu, portrayed by Joe Abeywickrama in Lester James Pieris’s movie, was the tragic anti-hero of Woolf’s novel) in uniform, equipped with much deadlier weapons than shotguns.

A Government dominated by a Prime Minister, a party and a civil society intelligentsia widely perceived as being on the wrong side of a defining civil war; the side of appeasement verging on collaboration, co-sponsoring a UNHRC Resolution that would admit foreigners to investigate, prosecute and sit in judgment of those who won the war, and to do so on Sri Lankan soil.

Were those who drafted and advocated this so obtuse as to be unaware that such a Government lacked legitimacy, and would lose whatever legitimacy it had? Winning an election does not confer the type of national legitimacy that can be achieved only by winning a war, and nothing detracts from national legitimacy as bearing the brand of a former collaborator with, or appeaser of, the separatist enemy.

If the post-Gotabaya future follows the trajectory of the Ranil-Mangala UNP in external relations and reverts to anything like the 2015 Geneva resolution, “the ideology and force that brought me here” (President GR) will be led by an armed, uniformed, Sinhala Spartan from the jungle battlefields of the last war, whose surname is unfamiliar and whose family has never been part of ‘society’, still less the Establishment. He would be a Sinhala-Buddhist Prabhakaran.

President GR having given the signal against the devolution of power, the religious Right has rallied to reinforce that position.

“A group of Buddhist monks has appealed to President Gotabaya Rajapaksa and members of Parliament, representing all political parties, to put on hold Provincial Council polls, pending early enactment of the proposed new Constitution. The group has, in a two-page letter dated 29 March 2021, stressed that the Provincial Council polls should be conducted in terms of the new Constitution as much desired changes were likely to be introduced in respect of the electoral system, as well as devolution of powers.” (The Island)

Now that President GR reiterated to President Xi, Sri Lanka’s intention to learn from the ‘governance experience’ of the Communist Party of China, recent remarks by Dr. Palitha Kohona, Sri Lanka’s Ambassador to Beijing, may give an indication of the State model that will emerge from the Gotabaya presidency and Constitution.

Citing Ian Johnson’s book ‘The Soul of China’, Dr. Kohona emphasises that “re-imagining of the political-religious state that once ruled China” is the vision of China of the “nominally atheist” Chinese CP under President Xi, whom Dr. Kohona seems to depict as a born-again Buddhist. (Daily FT)

President Gotabaya has to ask himself at least 10 questions before he goes down the road of “re-imagining the political-religious state that once ruled” Lanka and replicating it, constitutionally or extra-constitutionally.

The silence and sluggishness in post-Geneva Tamil politics are sourced in a duality in the collective psyche, between the reasonable “thirst” (to borrow from the Tiger slogan) for accountability and justice for individual crimes committed, and the hysterical “thirsting” for Sri Lanka and its military to be framed for ‘genocide’.

Firstly, as a means of delegitimising the Sri Lankan State as a whole so as to facilitate secessionist exit someday, and secondly, to stave off the stain of military defeat by pretending that their ‘invincible’ champions Prabhakaran and his Tigers were defeated only because the Sri Lankans committed genocide, or at the least, ethnic cleansing.

That doesn’t fly because every military in the world knows that in the last war the Tigers were out-thought and out-fought; beaten even in their own jungles by the Sri Lankan armed forces. This does not mean there weren’t horrific excesses, during and probably after the war, but these were exceptions and by no means the reason the Sri Lankan armed forces won. Those evils will be investigated, and its perpetrators, including those who gave the command or covered up, held accountable by the process that has been set in motion by the March 2021 UNHRC resolution.

After the southern civil war over devolution was won by the State and its democratic left allies, and lost by the anti-devolution xenophobes as the decade of the 1980s ended, the main obstacle to the implementation of the 13th Amendment came from the northern ultranationalists and the southern neoliberals.

The best of the southern and northern leftists – Vijaya Kumaratunga, K. Pathmanabha—were among hundreds of progressives who died in the Southern (Sinhala-on-Sinhala) and Northern (Tamil-on-Tamil) civil wars to protect the Indo-Lanka Accord and devolution, 200 Indian peacekeeping troops, and yet, the Sinhala neoliberals and Tamil nationalists did not respect their martyrdom by consolidating the 13th Amendment. They tried vainly to vault over it and embark on a new experiment.

Every one of those experiments—Chandrika’s and Ranil’s attempts at new, non-unitary Constitutions, ended in political disaster and the dramatic strengthening of the Sinhala nationalist right, which could have been avoided if the 13th Amendment had merely been implemented and if necessary, built upon. That was all India and the international community ever asked for.

The Tamil nationalist mainstream was always contemptuous of the 13th Amendment, never really laid claim to it and therefore never protected it, let alone consolidated the semi-autonomous Provincial Councils.

Even after the war and the crushing defeat of Tamil secessionism, Tamil nationalism never accepted the 13th Amendment as either the framework or the baseline of negotiations with the Sri Lankan Government led by Mahinda Rajapaksa, which had the legitimacy to push devolution through.

Tamil nationalism strove to secure a Constitution which would go beyond not merely the 13th Amendment but also the unitary framework itself.

In 2015-2019 the TNA joined the UNP and the JVP in creating a gridlock which has delayed the holding of Provincial Council elections. Today there is no process of political dialogue between the Government and the Tamil parties. Nor are there functioning Provincial Councils in the north and east. Therefore, there is no counterbalance to the unilateral creation of facts on the ground in those Provinces, through the various Presidential Task Forces.

There is also no political party with which the TNA can partner in the south, in Government or Opposition that is willing to go beyond the 13th Amendment, still less the unitary framework. Even the left-wing JVP and FSP are unwilling to commit to the 13th Amendment and the provincial-level devolution of power. That’s the hole that Tamil nationalism has dug for itself by refusing to apply the successful political strategy of the Sinn Fein of Northern Ireland in working the devolved structures that arose with the Good Friday agreement.

Devolution, a deepening of democracy, is now defensible, both locally and globally.