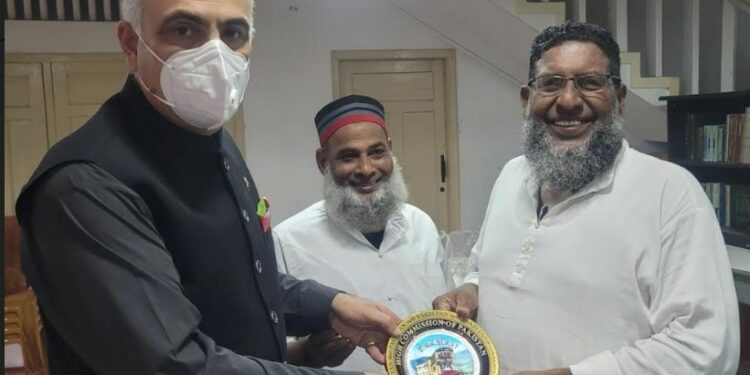 This drinking well project is the first of its kind initiated by the Pakistan High Commission in Sri Lanka on behalf of the Government of Pakistan. The project covers approximately 40 km area and benefits more than 200 villagers including a pre-school and a community mosque. These wells are the first of many more similar projects in different parts of Sri Lanka, specifically for areas where the water table is very low and it is very difficult for the local community to get fresh water for drinking, irrigation and other purposes.

Furthermore, the envoy distributed desktop computers in four schools in Mannar. The school principals were extremely happy about this help as initially their students were not getting equal opportunities to study technology and related capabilities like the students in a big city. The envoy also distributed sewing machines among deserving women of the local community. The ladies who received it were extremely happy as they were now able to help their families by staying within the four walls of their house, looking after their children as well as earning for themselves.

Meanwhile, Major General (R) Umar Farooq Burki paid a courtesy call on the Mayor of Jaffna and Imam of the community mosque in Jaffna. Matters of mutual bilateral interest were discussed.

The week-long maiden tour of the High Commissioner of Pakistan to the Northern Province is being deemed very important because of its multi-faceted engagements and the response received from the local community, civil and military leadership of that region as well as by the Most Venerable Monks of Anuradhapura.

The Pakistan High Commission, Sri Lanka on behalf of the Government of Pakistan will continue the goodwill activities which will benefit people of Sri Lanka regardless of gender, age or ethnicity, an embassy release said.