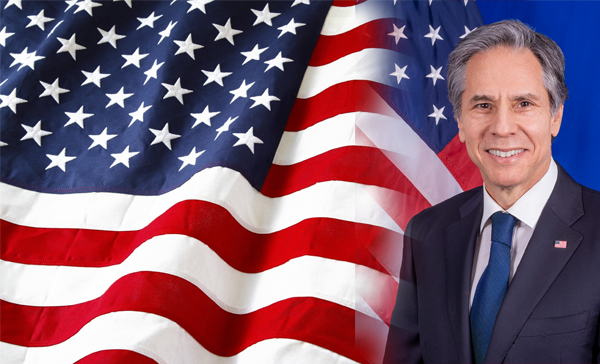 Sri Lanka is in a moment of challenge and crisis but has an opportunity to create a more democratic and inclusive government, U.S. Secretary of State Antony Blinken said on Thursday.

Blinken made the remarks in Cambodia at the start of a meeting with his Sri Lankan counterpart Ali Sabry, who said his country appreciates the U.S. role in securing support from the International Monetary Fund, Reuters reported.

The two were meeting on the sidelines of a regional gathering in Cambodia.

Excerpts of Comments by US Secretary of State Antony J. Blinken And Sri Lankan Foreign Minister Ali Sabry Before Their Meeting:
SECRETARY BLINKEN: Good afternoon, everyone. First I should say to you, Foreign Minister, congratulations on your appointment. We were very pleased to work with you in your previous capacity as a minister, but welcome this opportunity now.

Obviously, Sri Lanka is in a moment of challenge and crisis; the United States has worked hard to step in to support Sri Lanka in this moment. We’ve provided about $179 million worth of assistance of one kind or another, including loans and direct support, since June. But in crisis there is also opportunity, and I hope that – and we hope and will certainly support Sri Lanka in these efforts – there’s an opportunity in this moment to create a more inclusive, representative, democratic, responsive government and to use this crisis to seize that opportunity to make something very positive out of a very difficult situation. It would stand Sri Lanka in very, very good stead.

We’re also very supportive of Sri Lanka and the IMF working out an arrangement that also requires appropriate debt restructuring that has to be done on an equitable basis with all of the creditors doing what’s necessary to support Sri Lanka at this time.

But I appreciate taking the time to meet today and look forward to having a conversation. Thank you.

FOREIGN MINISTER SABRY: Thank you so much, Secretary Blinken, for your warm congratulatory messages when I took over. And I have worked very closely with your government in my previous capacity both as the finance minister and the justice minister, and we really appreciate the role played by the U.S. in trying to get an IMF bailout as soon as possible and the debt being restructured. We understand the challenges, and in this challenge we also understand there are opportunities. And one good thing about the whole thing is the Sri Lankans have been united in all this and largely they have been peaceful; there are no incidents. Basically the whole sort of revolution had taken place, but it had taken place very peacefully. So that’s the good part of it.

We see that there is a huge obligation on our part to put the country back on track and get its economy out of the woods, which we are going through right now, and we look forward to work with the American administration, U.S. administration throughout. And we are very thankful for all the support. In the recent past we have seen a very high-level delegation visiting Sri Lanka, and then we have had several roundtable discussions and we have had a lot of support for our IMF approach from the U.S. Treasury and State Department and from the government in general.

So thankful – thank you once again. And of course, we can’t forget the U.S. aid. USAID has provided a lot of support during these very difficult times. So I hope you will continue to provide that support and (inaudible) support, particularly some areas of very difficult reforms in (inaudible), and we look forward to working with the U.S. administration to do that. Thank you.