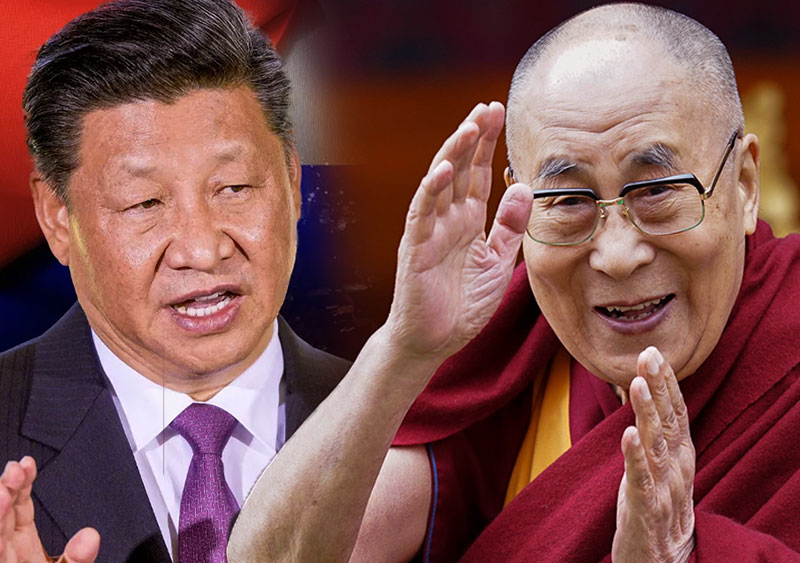 The Charge d’affaires of the Chinese embassy in Colombo Mr. Hu Wei is reported to have conveyed to the Most Venerable Mahanayake Thero of the Malwatte Chapter Thibbatuwawe Sri Sumangala Thero, whom he met in Kandy on January 11, 2023, his government’s strong opposition against His Holiness the Dalai Lama visiting Sri Lanka and that if such a visit was allowed by the Sri Lankan government the historical China-Sri Lanka relations will be damaged.

In a Colombo-datelined report of January 18 in ‘The Citizen’, Mr. Wei is also reported to have stated that the Dalai Lama is not ‘a simple monk’ but ‘a separatist’ trying to secede Tibet from China and, therefore, the Buddhist communities of Sri Lanka must safeguard the relations.

Not only political analysts or international political observers but any ordinary individual can see the stupidity and unhistorical falsehood of the statement that has been made with ulterior motives in a tone threatening the sovereignty of a democratic country and also the chief prelates of its principal religion. Mr. Wei has also been quoted as saying that Tibet remained part of China; there are over 46,000 monks and nuns in over 1700 Buddhist temples; the overall GDP per capita income, life expectancy and well-being have gone up several fold under the Chinese communist administration; and that Tibet has been transformed from serfdom to ‘democracy’.

History bears witness to the tragic and most heart-rending fact that up to 6000 monasteries and shrines were destroyed, hundreds of thousands of people who protested and fought against Chinese military invasion were slaughtered, their women were raped and killed, the precious and well-preserved and valuable Tibetan culture and tradition got progressively eradicated, famines were experienced repeatedly for the first time in recorded history of Tibet with hundreds of thousands dying due to starvation, civilians and Buddhist monks in large numbers committed suicide by self-immolation, thousands of people who protested were tortured and incarcerated in concentration camps and the others those who could manage, including Buddhist monks and civilians, fled the country in their thousands seeking asylum in India and in other countries.

The gentleman spoke of the well-being of the people and the increased GDP per capita income are achievements in almost all world nations as a changing world phenomenon, except in some Asian and African countries due to specific reasons. But the gentleman who made that statement should realize that the people who follow Buddhist concepts do not seek personal or economic welfare but a simple life and the freedom to live their life as they want and achieve spiritual uplift and that is exactly what the Tibetan people wanted and still do and the fact remains that they had it under the spiritual leadership of His Holiness the Dalai Lama and they loved him and look forward to the golden day of his return to their country as its spiritual and temporal leader.

The Dalai Lama fled to India over six decades ago during the initial stages of Chinese military invasion after coming to know that he was invited to China with the motive of assassinating him. The thousands of Tibetan Buddhist monks and civilians who fled Tibet after him are living peacefully and happily in many world nations, telling aloud to the world the sub-human and bestial treatment that the Tibetans got under the Chinese military invaders and what miserable life they are now living under the communist rulers. In fact, the Chinese military rulers will not find even a single genuine Tibetan Buddhist civilian or monk who will say, after these six decades of military rule, that he or she is happy under the Chinese military rule. All Tibetans abroad, including His Holiness the Dalai Lama, are continuing to voice for the liberation of their mother land from the military grip of the non-religious communist rule.

The chief prelates of Sri Lankan Maha Sangha had once again extended their invitation to the Dalai Lama for pilgrimage in Sri Lanka under the current state of severe economic downturn back here with strong hopes and beliefs that his visit will help boost the economy to certain extent because he has many millions of followers throughout the world and some of them are heads of multinational companies and globally recognized affluent individuals with prospects of investing in Sri Lanka while on the other hand his visit to Sri Lanka will help boost spiritual tourism because such a phenomenon was witness in Bodh Gaya where the five-year International Pali and Sanskrit Bhikkhu Exchange programme was launched on December 27, 2022.

When they extended the invitation to His Holiness the Dalai Lama, they never anticipated that China would take all possible measures to block his visit, like on all previous occasions, because Sri Lanka needed help from all quarters at her present precarious economic condition and that any country would most willingly support such help coming from any source. However, China reacted negatively, instituting immediate diplomatic and other political measures to prevent the visit. Their Charge d’affaires visited the Mahanayake Theros of the Asgiriya and Malwatte chapters hurriedly with lorry-loads of dry rations and other relief measures to ‘bribe’ the chief prelates and ‘demand’ from them, citing the purported ‘national welfare’ as a reason, to defer from their intention of bringing down His Holiness the Dalai Lama. Here, they have gone one step further and described His Holiness as a ‘separatist’, implying as if Tibet remained part of China from time immemorial and he was trying to separate it. But stupidity from a diplomat trying to hoodwink the entire world as China militarily snatched away Tibet from its most beloved spiritual and temporal leader and its innocent peace loving and ardent Buddhist followers. The Dalai Lama remains the most beloved global Buddhist leader and the most honored guest of the Government of India for the last six decades. He is the recognized and renowned Buddhist spiritual leader who frequently meets with political and spiritual leaders of world nations and tirelessly conveys the noble teachings of the Buddha all over the world attracting hundreds of thousands of followers and admirers after him from all over the world. How ridiculous to call him a separatist because he wants his own country back from the communist military leaders who snatched it under military invasion!

The Charge d’affaires of the Chinese embassy is also quoted as saying that Tibet forms part of China as either Kandy or Jaffna forms part of Sri Lanka. This is the highest level of ludicrousness to which anyone can drop down to and a diplomat of the most populous land has dropped down to that level. Pages of history stand witness to what inhuman, barbarous atrocities were committed by the Chinese for snatching away Tibet from its legitimate rulers and citizens. So let us hope that the Chinese would revisit their strong and rigid stand with regard to the visit of the Dalai Lama to visit Sri Lanka with a noble outlook.