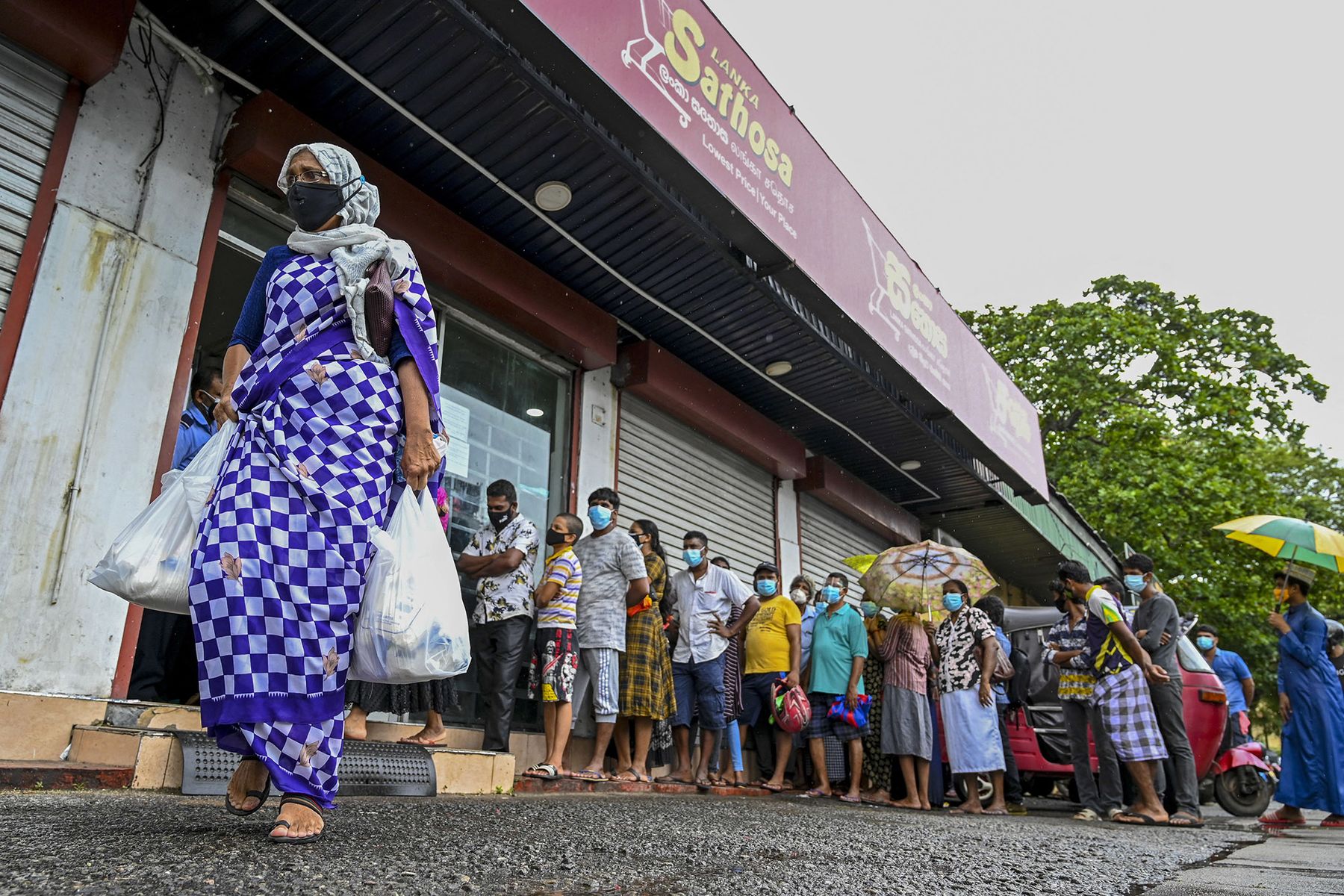 After meeting a $1 billion debt repayment in July from reserves, the government had only enough dollars to cover less than two months of imports. The nation buys wheat, sugar and milk powder from abroad and, with the Sri Lankan rupee down 7.3% this year, the import bill is soaring, stoking inflation and raising concerns about panic buying and hoarding.

“For investors it’s a question of when, not if, they run out of FX reserves,” said Nivedita Sunil, senior analyst for Emerging Markets at Lombard Odier in Singapore. “If you see where the bonds are trading, they are clearly telling you that they are no longer taking a longer term view.”

Sri Lanka’s foreign exchange reserves rose 26% to $3.55 billion last month, after the nation converted the IMF’s special drawing rights, which the South Asian island nation received on Aug. 23, into U.S. dollars, the central bank said in a publication on Friday.

While authorities maintain they will repay $1.5 billion of foreign bond payments due in January and July, a Bloomberg gauge of one-year default probability has risen almost 20 percentage points, to Asia’s highest level at about 28%.

The IMF has not received a request for financial support from Sri Lanka, Masahiro Nozaki, the mission chief for Sri Lanka, said in an email. “We stand ready to discuss options if requested. We continue to closely monitor economic and policy developments in Sri Lanka.”

The emergency measures are necessary “to give legal backing to stop hoarding. But with emergency and sudden lockdowns comes rumors and panic, and that creates excess buying,” said Adrian Perera, chief executive officer of Lanka Rating Agency. “Rates will need to be raised again this year to keep inflation under control and support the rupee.”

Travel restrictions have hammered the tourism industry, which contributes about 5% of the total economy, while an extended lockdown to try to halt the spread of the delta variant has hurt commerce and industry.

Among President Gotabaya Rajapaksa’s emergency measures passed by parliament this week was the appointment of Major General N.D.S.P. Niwunhella as commissioner of general and essential services, giving him the power to commandeer food supplies and regulate prices to “safeguard the interest of consumers.”

Opposition lawmakers decried the move as an attempt to extend the president’s power, arguing that the crisis could be dealt with through existing legislation.

The emergency rules allow the president “to suspend civil liberties, arrest and detain any citizen without a court order, suspend laws of the country, enter any premise without a court order and seize privately owned property,” lawmaker Eran Wickramaratne for the main opposition Samagi Jana Balawegaya party said in parliament. “No President should be given more powers than are needed to execute his responsibilities.”

The new rules were enacted swiftly. On Wednesday, officials seized stocks of rice from mills in Polonnaruwa district, one of the nation’s main growing regions, in order to distribute the grain under a government price-control system, according to the government. Authorities accused the mills of hoarding the supplies.

The following day, the government introduced a 100% cash margin for letters of credit on imports of 693 items, including chocolates, dairy products, wines, cosmetics, clothes, and electronic goods, and barred banks from extending credit to buyers to meet the cash requirement.

The measures come on top of capital controls imposed earlier this year to limit how much foreign currency leaves the country. To shore up reserves, the government has also asked banks and institutional investors to propose foreign-currency term loans by Sept. 22, in multiples of $50 million.

The swapline with China and another with Bangladesh, together with funds supplied in August by the IMF through special drawing rights — a facility offered by the fund to boost global liquidity — should cover Sri Lanka’s dollar requirements until year-end at least and enable it to meet bond repayments due in January, according to Ek Pon Tay, senior portfolio manager at BNP Paribas Asset Management in Singapore. But in the “medium term, firm energy prices and the pandemic’s impact on tourism earnings pose challenges to replenishing foreign-exchange reserves.”

With currency reserves depleted and inflation now at 6% — the upper end of the central bank’s target range — investors are bracing for more rate increases. The central bank on Aug. 19 unexpectedly raised its benchmark rate for the first time since late 2018, saying lower credit costs had boosted imports more than exports, widening the trade deficit.

The rate hike helped Sri Lanka’s dollar notes erase monthly losses and gain 2.9% in August, the biggest increase across Asia, according to a Bloomberg index. But it may not be enough.

Sunil at Lombard Odier says the government needs a longer-term solution. “In our view, that can’t happen without an IMF program.”