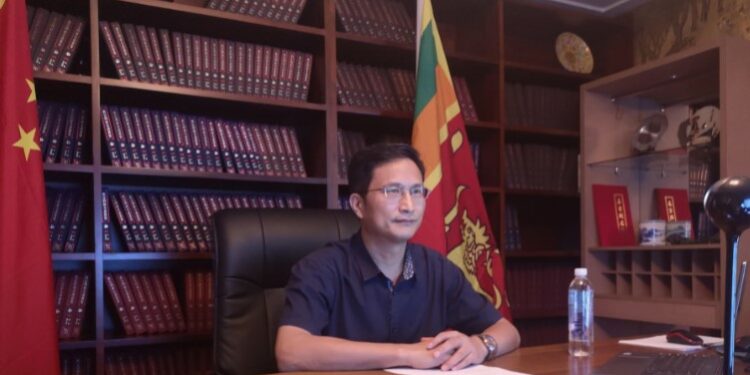 China’s Ambassador to Colombo, Qi Zhenhong dismissed speculation about a recent visit to the northern Jaffna peninsula saying the journey was without any ‘hidden agenda’ to a part of Sri Lanka.

Ambassador Qi Zhenhong visited Jaffna’s Point Pedro, the northernmost end of Sri Lanka and Mannar from where a land bridge is thought to have existed at one time to Rameswaram in India.

“Jaffna is a city in Sri Lanka in the north of the island. It is not a city in the south of any other country,” Qi Zhenhong said when he was asked about his visit to Jaffna and his message to Jaffna people at a media briefing on Sunday.

The visit came against a backdrop of suspended Chinese power projects in three islands off Jaffna after India had raised security concerns, government officials have said.

Qi Zhenhong’s visit to Jaffna had raised concerns as he distributed compensation for Sri Lanka’s northern fishermen who had been facing a lack of fish catch mainly due to Indian bottom trawling.

Some observers had characterized the visit as “provocative”.

China had been eyeing infrastructure projects in Sri Lanka’s war-torn north and east, but it hardly got any because of India’s dominant role in the region, Sri Lankan government officials have said.

“I know that it is a very important city in the north. It is a city of minority ethnicity and also after almost the end of three decades of war,” Qi Zhenhong said.

“It is a very simple and open visit without any private or hidden agenda.”