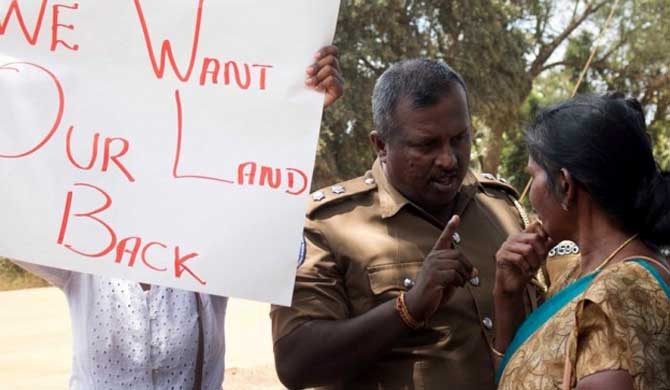 War affected Tamils in Mullaitivu are facing an existential threat as fertile lands and rich fishing resources are allegedly being grabbed under the pretext of archaeological excavations by right wing Buddhists.

An elderly Tamil landowner who was clearing his land-in the Thannimurippu District Secretary division-which was abandoned during the war time was stopped from doing so and tilling his ‘own land’ by a team of archaeological department officials led by a Buddhist monk.

Also, two local Tamil journalists covering the ongoing land grabbing and other issues affecting the Tamils were threatened by the forest officials when they went there for newsgathering.

The forest officials who forcefully stopped the landowner K. Peranantham from clearing his fields were caught on camera by these journalists retaliated immediately attempting to stop them from carrying out their duty, and demanded to see their media identity cards. Pictures also show the media identity card of the one of the journalists being inspected by those officials.

Locals allege the police and the forest department officials were acting under instructions of the Buddhist monk.

Eyewitness told JDS that the monk accompanied by officials told the land owner in an intimidating way that he cannot enter his land and the 500 acres of land in Kurunthurmalai area is archaeologically historic and a sacred – ‘nobody has got any private land here’ and ‘none could enter the area and do any clearing operation’.

The landowner apart from being banned from entering his land has also been summoned to the local police station.

The fertile land with fruit bearing trees including mango, jackfruit and coconut is close to the Arumugathankulam – a water body in the Thannimurippu DS division-which was also occupied by the Sri Lanka military recently.

Subsequently they stopped local Tamil fishermen engaging in sustainable fishing for generations using hook and bait, while allowing non residents to do so using banned nets, seriously affecting the livelihood of the Tamils.

“If the military can fish in this tank using nets, why can’t we living in the same village do the same?” locals question.

Recently under the guise of archaeology and Buddhist culture, Tamils worshipping in the Athi Aiyanar temple Kovil in Kurunthurmalai for hundreds of years were stopped from entering the area saying it’s a place of ‘Buddhist importance’ and further exploration is needed.

A local military camp has also been set up along with a make-shift Buddha Vihara at the Kurunthurmalai foothills. Tamil lawmakers too were earlier barred from visiting the place but were allowed subsequently while the journalists travelling with them were stopped.

Sri Lankan state minister for National Heritage Vidura Wickramanayaka recently visited the Kurunthurmalai area to inaugurate the archaeological exploration and prayed at the vihara put up by the army there.

War affected Tamils in the north fear of forced Sinhala colonisation plans taken forward under the guise of archaeological exploration.